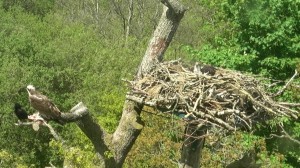 Both ospreys are keen egg-sitters and although KL does the  greater part of incubating, including the nights, her mate is quite happy to take his turn. We have been really impressed at  how well they have worked as a team at this since the beginning – better than we might have expected from first time birds. One thing that has showed their inexperience though has been in their table  manners. Both of them are really messy eaters, dropping scales and guts and sometimes half a fish in and around the nest site. About a  week and a half ago KL became very protective of the nest – possibly because there could be faint movement inside the eggs from the developing chicks. So, instead of taking her meals away to eat she started munching  them on the nest side This has been a bad move because the already interested crows and magpies, always on the lookout for a free lunch, now feel that their favourite Bistro has moved to town centre and have been swooping and diving over the sitting KL trying to secure a table. This picture shows our male In catch 22 position – to see off the  unwelcome food snatcher  he will first have to relinquish his grip on his dinner – and that of course will be playing straight into  the  crow’s plate!

More mature behaviour is to always take your fish some way away to eat except when there are chicks to be fed. Then,as SX and Mrs. demonstrated, hoovering up every last scrap that is dropped is top priority after every feed.

Day 28 of incubation has possibly seen the highest temperatures of the 2013 season in Lakeland.  Interestingly, another modification now adornes the nest….a large stick on the left brought in by the male.  This picture, taken this evening just after 21.30, shows KL having supper with the male on the eggs, she will be well fed for another long nights’ incubation ahead. 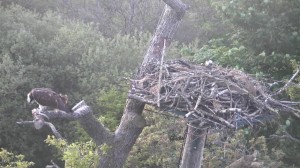 One of our former staff members, Philippa (Phil) Bell, has taken the plunge and married her partner, Graham in a beautiful ceremony beside Loweswater in the Western Lake District, on the family farm where she grew up. Phil had two spells with the LDOP, in 2010 and 2012, and was a popular member of the team based at Dodd Wood, welcoming visitors and showing them the ospreys.  All of the staff and volunteers from the LDOP wish Mr and Mrs Chadwick all the very best for the future. 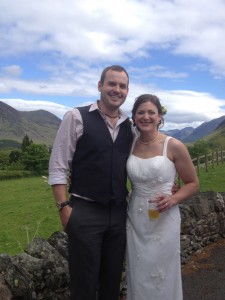