They find themselves a nice warm spot and if they are lucky spend their time roosting and fishing. As we enter Christmas week that is exactly what Number 14 is doing – roosting and fishing. He might do this at the same location for a week, a month, a year or even several years; meanwhile we shall watch and see.

Happy Christmas to all our followers.

The island of Bioko is described as one of the most beautiful and biologically- significant places in all of Africa. It is home to Africa’s greatest concentrations of endangered primates and to more than fifty unique species of plants and now one rather special osprey known as Number 14. It is part of Equatorial Guinea and therefore just north of the equator and therefore perfect for wandering young ospreys – not to mention LDOP staff and volunteers ( who are rather chilly in Cumbria) if someone out there would like to sponsor an LDOP expedition?

The map below demonstrates how Number 14 is taking to the island this December. On the 2nd December he moved even closer to the Equator by taking a flight out to sea probably on a fishing trip. He has now returned to the island and is exploring the northern side of the west coast. Red dots on the left side at the top were from yesterday. 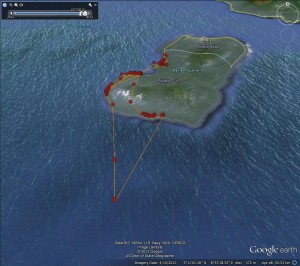 These satellite trackers are amazing things and keep us in daily touch with a bird four thousand miles away – anybody know where we can find one to fit a Reindeer?