After keeping us waiting for nearly two whole days, three of our volunteers, Terry, Mary and Glenys were able to confirm what we thought when we finally were able to read KL’s leg ring.  KL was ringed on 19/06/09 in Inverness-shire, she then migrated to the Sine-Saloum Delta in Senegal, where she was photographed twice by colleagues from the Rutland Osprey Project.  Last year she nested at Bassenthwaite Lake, and raised two healthy chicks, one (White 15) perished in the Western Sahara, but the other (White 14) is on the Equitorial Guinean Island of Bioko. Hopefully this year she and her mate will have another successful season 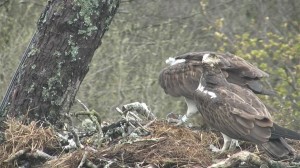 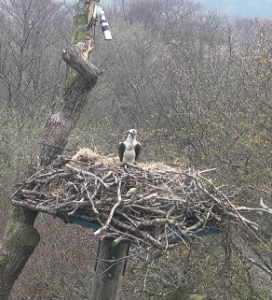 As we turned on the nest camera at 8.15 this morning this was the scene that greeted us -an osprey with a ring believed to be Blue XY. The bird remained around the nest area most of the morning moving bits on the nest and appearing to look at the skies. At lunch time we lost sight of it as it took a fly around. Later in the day at 16.05 two ospreys were seen near the nest but again disappeared into the haze that has been around all day. Ten minutes later two ospreys did a fly past of the Lower Viewpoint. Caution is the watchword at the moment as we do get ospreys on passage to Scotland passing over the lake but……….

Meanwhile our young Number 14 continues his lifestyle four thousand miles away on the island of Bioko.