Nesties are catching on at Dodd Wood. 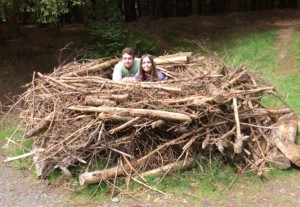 Remember – Not just an experience, more a way of life!

Many thanks to Colleen Wood for sending in the picture.

Can you do better? The proof is in the sending. 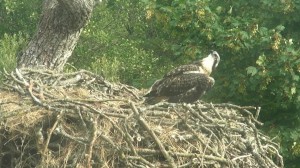 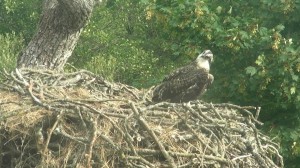 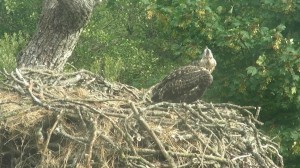 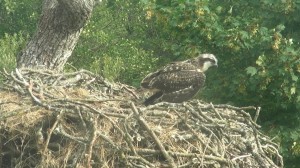 Where’s he gone now? 9A watches his brother zip past. 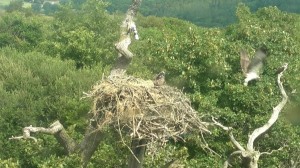 Yesterday afternoon was one of the hottest this summer for humans. Sundresses, shorts, bare backs and legs, dips in the Lake and ice-creams did little to stop a mist of gentle perspiration. At the upper view point on Dodd the rock face baked and crackled, reflecting its heat and experience to the volunteers and visitors.  Not the day for exertion you might think! However, 8A thought differently and kept his audience on the edge of their seats (at Whinlatter) or straining against the fence (at Dodd) with his “Shall I, Shan’t I” antics on the nest. Tremendous routines of flapping and lifting into the air above the nest were interspersed with teetering balances on the edge of the nest as he looked down the dizzy heights to the ground beneath. Flight may be instinctive, but it is also a frightening business to finally take the flap to the point of no return. A near moment was when the wind took him beyond the last sticks of the safety net and only frantic back pedalling got him landed again.  But eventually the leaving of the nest in the afternoon was less dramatic, a mere slide up the breeze and there he was, gone.

Unlike some of our other chicks he thankfully stayed in sight for most of the afternoon in the vicinity of his home, using the branches above the nest as a marker for his circles and returns, and eventually finding his way back to base. A fine start for a wing cadet. 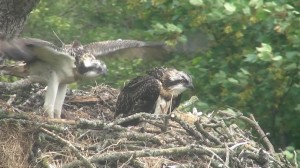 Hatched on May 31st Blue 8A is now 52 days old.(his 7th week.) His plumage is glossy with regular preening. Tail feathers and wing pinion feathers are all perfectly arranged and he has been exercising those erstwhile flabby flight muscles at regular intervals. Hanging on to the bottom of the nest with the tips of his talons he throws himself into energetic flapping routines, revving up into a blur of motion. (Just look at those long legs too!) With the warm weather and the stirring breezes we have been having it has been perfect for take off and so we have been waiting on tenterhooks too.

8A looks less than impressed with its brother’s wings whirling around its head, but it too has been having a good go in the gym workouts. However, although improving daily, tail and wing feathers are still looking irregular and too short to contemplate a successful jump in the near future.

Every year something different! For the first time here is a genuine sea fish hauled into the nest. It looks like the fine weather on Friday 17th prompted our male to go down to the beach and catch this fine flat fish. We are floundering to decide though what sort it is?? KL was certainly not phased by its unaccustomed shape but showed herself to be a dab hand and tore straight into it to feed both chicks. So, if you are skating around the coast at 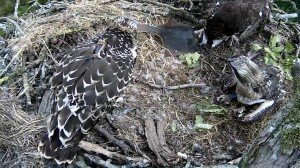 Workington, Maryport or even Whitehaven keep a look out for a dark winged surfer! 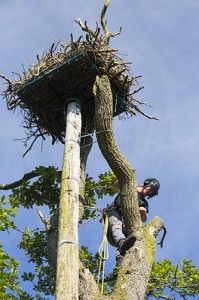 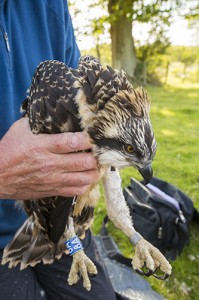 Our two chicks were ringed on Friday 11th July. The weather was calm and mild so our tree climbers and ringing team got through the process in the minimum of time.

Both chicks were lowered down to the ground from the nest in a bag and had their ‘health check’.

The eldest chick (2) was completely healthy and quite feisty, getting in a few nips to the ringers’ fingers.. It had a British Trust for Ornithology metal ring fitted to its left leg and a colour ring fitted to its right leg so it is now officially called ‘Blue 8A’. Its weight and size indicated that it was a male. It had a small satellite transmitter fitted in the manner of a back pack. It is now bleeping regularly – so we look eagerly forward to monitoring his first flights in a couple of weeks’ time.

As has been obvious through the CCTV camera, chick Three was a lot smaller and less well developed than its sibling, due to its previous illness. However, Roy Dennis, the world Osprey expert, felt that if all went well, it would stand a good chance of fledging eventually. Very good news!  It is now ringed as Blue 9A. It did not have a transmitter fitted.

Very soon after the chicks were returned to the nest KL landed and a while later our male brought in a good sized fish and everything went back to normal. As usual neither of the chicks  have taken the slightest bit of notice of their ‘bling’.and just preen around it.

Thankyou for the great iImages by Ashley Cooper www.globalwarmingimages.net

Forget ‘Selfies’, come along to Dodd Wood for a

Anna, Christine and Jim did and look how cool they are. 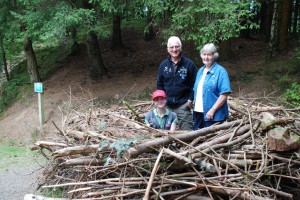 Nesties – Not just an experience, more a way of life!

The second hatched chick appears to be developing normally. Its feathers have been bursting out of their pins over the past week and are showing the characteristic dual colour of immature chicks – a buff edge surrounding a brown base. It spends a part of its day proudly preening the waxy cuticle away from the vanes, dropping a dusting of white flakes as if it had a bad case of dandruff,

Number three chick is very small for its age but seems quite over its illness now and like its sibling is shuffling around the nest, stretching its wings over its head and eating heartily. However, it comes to grief when it comes to the preening –   poor Three has hardly any pins, let alone feathers, to speak of. It goes through the motions, wriggling its beak through its thin covering of fluff, but obviously there is something missing in the experience. Yesterday it diligently started preening a neighbouring stalk of dried grass before realising its mistake.

Even taking into account the 3 days difference in hatch dates it is still behind in this area of development. We hope it is just the stress of its illness that has set it back and that it will develop feathers over the next couple of weeks.  An avian version of the hairless cat would have major aerodynamic difficulties.