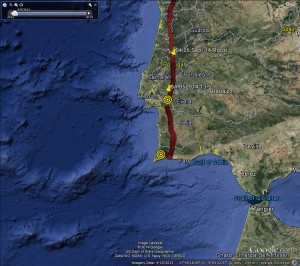 Within a week of leaving Bassenthwaite our young osprey is still going well. Yesterday afternoon (1500) he was looking at leaving Europe for Africa. More detail of his journey so far will appear on the website this week. 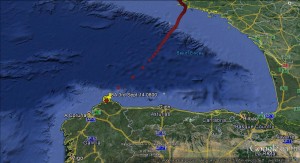 While speaking to visitors last week we frequently said that it was going to be a close call between the viewpoints closing for the season and the ospreys leaving. As it happens 8A  won …..just.

He started his migration on Sunday morning leaving Bassenthwaite Lake at about 10.30. By 11.39 he was over Pike O’Blisco, 12.00 Coniston Water, 12.37 Cartmel Sands, 13.28 east of Barrow-in-Furness, 14.03 south of Heysham, 14.22 over Garstang, 14.57 over Preston. He then followed the M6 to Northwich and then spent his first night away from Bassenthwaite just south of Nantwich near the village of Aston. We then have an annoying gap in our information so far for the 1st September but he probably roosted along the Devon / Dorset coastline to reappear at 9.30 on the 2nd crossing the English Channel  heading for Brest in France. At 14.15 he left France to cross the Bay of Biscay reaching Spain around midnight yesterday. This morning at 8.00 he was still at his roost east of Coruna.

It is also interesting to note that the course he seems to be following is the traditional one to Gambia and Senegal.