As Unring has no ring some authorities would doubt that he is the same bird as last year – ‘No verifiable evidence!’ Even similar plumage is disregarded.  However, the behaviour of the couple towards each other is the strongest indication that they are indeed the same pair as last year, and if birds cannot be said to be in love they are certainly extremely content.

Just before Unring arrived KL hopped onto the nest for the first time and started looking around eagerly. Suddenly, with a flutter of wings she flipped off the nest and flew off towards the Lake. A quarter of an hour later there was Unring, sitting on a branch tucking into a fish followed closely by KL back onto the nest again. The strength of their regard can only be measured by the restraint that KL showed, watching her mate, not seen for 7 months, eating a fish that in osprey etiquette could quite rightly be thought hers. She made no move or sound to get it – the opposite of female osprey behaviour eying up a new gentleman friend.  After a little while longer she had her reward as with no fuss he gallantly presented her with the tail. 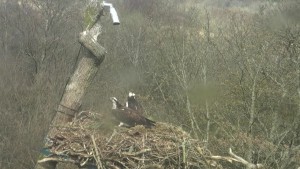 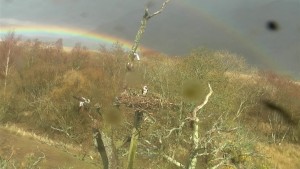 Ullock Pyke, Carlside, Scarness – a Norse landscape dominated from the air here with the descendants of Viking birds.

The tree Ygdrassil from the Northern myths was said to have an eagle on its topmost branch to oversee all the realms of Gods, men and the underworld- a seafaring osprey must be the most likely contender for the place. Certainly today there was every chance that they might have soared up to feast on fish in Asgard as a mighty double Bifrost  spanned the valley. But – lucky for us, the catch here in Midgard is every bit as tasty. 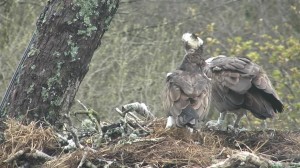 We can confirm that the bird we have been watching since Good Friday is KL !  Today she was joined by her mate, the un-ringed male.  They have been mating throughout the day and are holding territory over their nest.

So….we are up and running, ‘phew !  Just an additional  note, we are currently recruiting for two new members of staff to join the team, if you are interested you can apply at www.forestry.gov.uk/vacancies or via direct.gov.uk .

Finally, a special thanks must go to Becky and Barbara, along with the team of volunteers for holding the fort until we fill the vacant posts !

The day’s weather ranged from snow and sleet to (a bit) of bright warm sunshine, interspersed with torrential showers of cold rain. This did not deter the many families of walkers following the trails at Whinlatter and did not deter the osprey who sat for the majority of the day on a branch rather closer to the camera than yesterday but STILL not within range of reading its ring. A large pike kept it occupied. From plumage, markings and behaviour we are putting our bets on it being KL – but can’t commit until the ring is read,

First Day back for volunteers and First Day for an osprey sighting!

So, that’s made up for the very wet weather today.

The bird was first seen at 13.10 on the live CCTV at Whinlatter by a sharp eyed visitor. As it was sitting on a branch and not on the nest we could not zoom in to identify it. Was it one of ‘our’ birds? With a bit of jiggling of the camera we got a closer view and we could see it had rings on its legs. Was it our female KL or not? Last year both KL and Unring arrived on April 7th. The spell of good weather may have encouraged some birds to arrive earlier and some have aleady made landfall at Rutland water and Loch of the Lowes. We were glued to the screen, watching it scoff a fish for the next four hours and willing it to make the jump onto the nest where we could read the letters. But no such luck. Perhaps it will appear again tomorrow or maybe just disappear up North.

At Dodd the highlight was the appearance of a number of Siskin. This little bird has not been seen in any numbers for some years there and the males’ bright yellow added a flash of colour to the rainy day 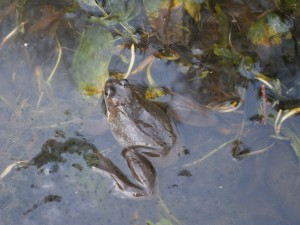 Let me tell you what the Bassenthwaite Valley looks like on this early Easter-tide. Just wonderful!

After the deluge of winter we have had a week of weather that is usually depicted on chocolate boxes or in dreams – clear blue skies, warm sunshine, nearly no breeze and given extra zing with seasonal chill in the shadows. The sun goes down red and two nights ago the full moon rose in a huge sultry orange over Skiddaw, through the evening mist. Every living thing has responded, with catkins, yellow as Lent pancakes tossing their pollen all around, soft grey cat-paw pussy willow breaking into jade flowers for the early bumble bees and the hedgerows splashing out in the tattered green bice petticoats of splitting hawthorn buds. So good to pick and chew on that their Spring name is ‘bread and cheese’. Small birds are singing fit to bust, consolidating territory and in the ponds frogs rasp out love-croaks to a sea of spawn.

And the Lake, transforms the colour of infinity above from deep indigo to shallow turquoise against the pale margins of last year’s Canary grass. Nearby on the marsh, the Osprey nest has a new bed of dry grass and moss laid out by our wardens to welcome back or entice migrating birds into stopping for the season.

So, with the next fronts of lush Atlantic moisture starting Spring is set into unstoppable motion. Definitely a Good Friday! 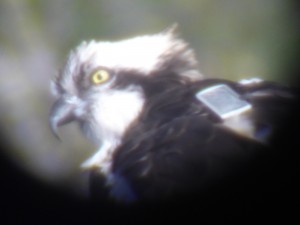 Sad news first; during December 2015 while storm and tempest hit the Lake District and surrounds our young bird VO disappeared from our view in Senegal. Our tracker stopped sending a signal either due to the loss of the bird or the failure of the technology.

Number 14 meanwhile seems to be having a peaceful time around his favourite location in Bioko. In previous years he has taken a short holiday flight over to the Niger Delta during January or February. Maybe this year he’s saving his energy for a longer flight north. If he’s off soon it could be to find a mate.

Talking of holidays, one of our volunteers, Jane, seemed not satisfied with watching Ospreys for most of the summer from Dodd and decided to go for a mid-winter holiday to southern Spain. Of course while there, she could not resist the temptation of looking out for the said bird. The picture above is the result, taken from a phone camera, no less. You may notice the strange tracker on the bird’s back. This bird, like Number 14, was provided with a tracker, also in 2013. Unlike Number 14’s it has now stopped working. The Osprey in the picture comes from Corsica and has been part of a research project run by Flavio Monti from the Ferrara and Montpellier Universities. Some Ospreys in Corsica breed on the cliffs and seem to migrate west to Spain – proving just how flexible these birds can be. For more interest Google ‘Flavio Monti. The Ospreys of the Mediterranean Basin’ and read more about these fascinating birds.

If like Jane, you can’t get enough of Ospreys why not become a volunteer? If you are near Keswick on Friday 18th the volunteers are gathering for the first time this season at the Crosthwaite Hall near the Co-op, at 6.30pm or you could give Whinlatter a call on 017687-78469 and ask for Nathan or Barbara. The season starts a week later on the 26th March.

Many, many, thanks to Jane Wise for the story and photographs.