The download at 13.00 on April 13th shows No 14 making a last push against the desert leagues. In front rise the coastal mountains that he cut through a year ago.  Near their base on the desert side lies the oasis town of Biskra, land of 150,000 date palms of exceptional quality. A large body of water shows up on Google earth maps directly in his flight path so there’s the hope of fresh fish.

The temperature for his roost last night fell to 14C but today’s forecast predicted horizon to horizon sunshine averaging 29C with a light south easterly breeze. 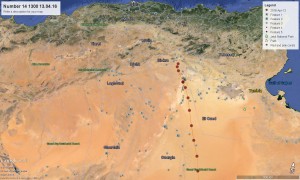 Meanwhile back on the Bassenthwaite nest there was no sign of a second egg, whilst the first egg, rather worryingly, was being tenderly wrapped in black plastic by its Father!

Number 14 is no longer ‘at home’ on Bioko. He is actually half way across the Sahara Desert.

No 14 was hatched in 2013 – KL and Unring’s first brood. He and his satellite tracker have given us huge insights into osprey migration. For a start, in his first southward migration he bypassed the West Coast of Africa and made his summer home on the Island of Bioko, 1000 miles further on. Last year he made his first trip back – the long way round – visiting Italy, Czechoslovakia, Germany, Denmark, Norway and Sweden, to name but a few. Eventually he arrived back in Cumbria after a journey of 13,000 miles to settle near Penrith. This winter he has been back on Bioko and has now started his gruelling northward migration again. What will he do and where will he go this time?  And the biggest question applicable to all migrating birds – will he survive?

He has flown approximately 1500 miles since the 3rd with approximately 800 to go before Med. Coast. Seems to be on course for Tunisia similar to last year.

We have been watching the signs of broodiness so we were not surprised when early this morning KL and Unring’s first egg was spotted. And first views of it show that it is indeed well spotted, blotched and squiggled. One end is covered with a round dark rose red mark, the rest is a creamy white overlaid with dark dashes. Extremely beautiful, this outer shell, even more wonderfully, holds the potential for a new life.

Unring has brought her a couple of fish, one of which she flew off with, leaving him to do his first stint of sitting. The second she refused as by mid-afternoon the rain was coming down in buckets.

We also have great news about No 14. Where is he now? – you’ll have to wait until tomorrow to find out! 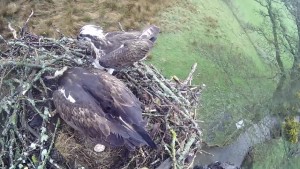 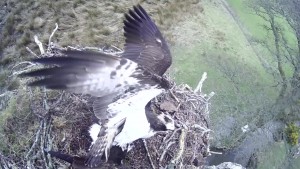 ‘It’s a wise child that knows its father’ or with a more avian twist   ‘It’s an egg-head that can identify its genes’.

Unring – as do all male ospreys, wants to make sure that he will be the progenitor of any offspring hatching from the eggs of KL. He does not want to spend all summer looking after chicks that are not going to carry his genetic material into the next generation.  So mating occurs many times in the two weeks leading up to lay. This serves the multiple purposes of cementing bonding, fertilising the eggs and of course making sure his female is not eying up talent elsewhere. So far, this last has not been an issue on Bassenthwaite but with a feisty third bird around there is a potential rival. KL sensibly seems to know when she is on to a good thing and with Unring has vigorously defended territory and nest with him against the tall dark stranger over the past few days. 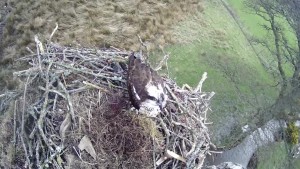 Nest building has been going on apace with Unring bringing up fair sized sticks, tiny sticks, medium sized sticks and the occasional very large stick. Slivers of bark, dry grass and fragrant manure off the field line the nest cup. Over the past few days KL has taken to hopping into the nest, and rather than rearranging everything, has just been standing with a ruminative look in her eye, hunched up against the wind. She is definitely feeling herself into brood mode. From a life of the constant movement of migration to the extreme opposite of constant confinement takes some contemplation and quite a few hormonal changes. Meanwhile, with virile unconcern, Unring blithely muscles in yet another stick.

The spring is sprung, the grass is riz.

I wonder where da boidie is.

They say da boidie’s on the wing.

But that’s absoid. The wing is on the bird.

Isn’t Spring so full of events that are hoped for but feel so wonderfully unexpected when they suddenly happen? Yesterday at lunch time there were no Spring migrants to be seen. At tea time the skies above the sewage works at Cockermouth were whirling with dozens of house martins and some swallows. A first vibrant Chiff chaff excelled itself in the willows at Great Clifton and garden warblers had been heard elsewhere.

A week ago there were no flowers poking their heads up out of the cold earth – now this bright stampede of coltsfoot is sending up blossom well before its leaves.

And on the marsh the third osprey seen picking up sticks for itself! (whilst KL and Unring weren’t looking) 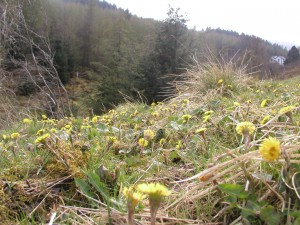 Yesterday was a rest day following five days of busy nest building and courting, topped by the grand chase the day before. Both birds perched away from the nest, in the alder and broccoli trees and the nest tree top for the majority of the day, only meeting up there when Unring brought in a trout.

Still they are well on their way to having a very servicable area for KL’s confinement -eggs in possibly about another 5 or 6 days time.

With our pair arriving over the dates of an early Easter many visitors have asked if this is normal. In general our birds have arrived in April but some early dates are when 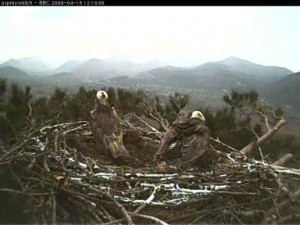 Mrs, his second partner arrived March 26th 2011 and March 30th 2012. To remind us of those patriarchal years here is a picture of No-ring and his ‘Mrs’ back on the 14th April 2009 looking out to the future from their Dodd Wood nest.

This season a number of ospreys turned up in this last week of March including one to Loch of the Lowes and one to Fowlshaw. It is probable that the spell of good weather in mid March gave them the right conditions to put the miles away, despite the usual holiday downpours at the end of their 3000 mile migration. 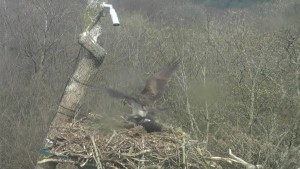 Since our pair have been back there has been a shadowy third bird dodging around on the horizons. At 10 past eleven today it thought it would try its luck on the nest. The first we knew of it when KL suddenly stopped preening and jumped from the side branch onto the nest looking up at the sky intently. An osprey swooped down – we thought it was Unring but it overshot the nest by inches and KL reared up shrieking and holding out her wings. On its second pass we saw it was clutching a headless fish -if he thought this would impress KL he was mistaken. She was having none of him or his fish. Unring then joined in the fray and for a hectic moment there were both of them buzzing each other and KL over the nest and around and around the tree.

The intruder dropped its fish, turned tail and skidded away towards the Lake, closely followed by Unring and KL and some excited viewers from Dodd. Ha! Vanquished!