KL and Unring continue to be successful in looking after their chick and it is growing fast with triple helpings of fish. Like all osprey chicks it has an oesophageal pouch which acts a bit like a hamster pouch to hold an extra serving of dinner. This means it need not be fed quite so often and there are emergency rations to hand (or throat) if the chips are down. . When you compare the work blue tits have to put in to feed their family, with a constant stream of grubs and caterpillars throughout the daylight hours, catching four or five fish a day seems a cinch.

The nest has been undergoing a change of shape with both adults adding sticks to the sides of the nest cup especially at the point where there was the slight collapse a few weeks back. This makes a higher wall and a deeper cup and will make it more difficult for an avian predator to clamber in.

Some will have seen this stunning picture on facebook taken by Anthony Byrne when No 14 happened to have been floating over his head at Pennington. Look at that wingspan and think of the wing beats needed to travel the distances he has done! 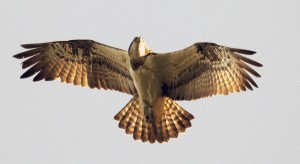 It is with both dread and hope that we are switching on to the live webstream or big screens at Whinlatter this morning and wondering if the chick will be there or not. However, with a little head poking out from between KL’s feathers  it seems like she and Unring have kept their one chick safe since the last attack.

There have been a lot of us that have had a weep about the situation. It seems such a waste of the tremendous effort that our birds have been to just to get to this stage. The long and hazardous migration, the nest building, the working out of a relationship, the development of excellent parenting skills, the fish caught, the care given, and three eggs out of three, all viable. Then out of the blue, before it has really started, the life created knocked out of play. According to osprey expert Roy Dennis, from all the records, he has not come across one in which magpies have learnt to become predators of ospreys. What a freak chance that ours should change that record.

And the tension is not over yet. The remaining chick is the eldest and biggest, but for another 4 or 5 days still vulnerable on account of its size. We cannot know if KL and Unring can sustain the level of protection needed.

Intellectually, we understand they are wild creatures in a wild natural environment and that these things happen, but being mortal and vulnerable ourselves, any death witnessed still stings.

But KL and Unring haven’t given up yet!

A bleak look out for the ospreys as the magpies stole another chick at 17.00 last night as this account describes.

16:58.  I put on my IPad to have a look, KL + two chicks.
16:59.  KL lifts off.
17:00.  A magpie comes in from the right of the picture, barely pauses but after it has passed there is only ONE chick.  IPad picture does not have all the image so I’ve checked it with my main computer, unfortunately I can confirm that there is now only ONE chick.
KL came back to the nest almost immediately but Initially  appeared not to notice.
She starts to settle at 17:08 but is obviously uncomfortable. 17:12. still not comfortable. 17:22 starts preening.

It has been a sad day, but yet another chapter in the real life saga of the Bassenthwaite Ospreys.

On the other side of the coin

The chances of seeing Number 14 somewhere in the South Lakes, North Lancashire must be good at the moment. On Saturday he was on Elterwater (1400), and Coniston (1700). On Sunday Leighton Moss in front of the new tower (0800) Killington Res.(1500) South Kendal – Kentwood Road (1600) and at 9.00 this morning near Hornby Lancashire. Still very much in the south Lakes tri-angle for most of the time. So the story goes on.

Magpies have always been a feature around the current nest site. They have been seen to nip in and out of the nest at times to take fish scales and tails, and at the end of the season to ‘dare’ to be on the nest with juvenile birds.  In the past they have been considered perhaps less of a threat than the buzzards that buzzed the nest on the side of Dodd and the goshawk drifting like a phantom  through the understory at Wythop. Both of these would have taken osprey chicks if they could, and one reason for the adult birds changing nest sites could well have been to get out of reach of these fierce predators. But where the two birds of prey species failed in their attempts the disregarded magpies have won. With observation, cunning and boldness they have worked out that there is a moment of opportunity to slide onto the nest just as KL flies off for a comfort stop. She will not have time to turn in mid air and attack before they have been in and out. Unring, sitting on a nearby branch will not have time either to swoop in before they swing down under the nest and away into the scrub.

In this way the magpie stole away the newly hatched chick at 08.20 this morning. It was so fast that viewers could hardly believe it had happened, but sadly, clear pictures showing only two little bodies instead of three proved the sighting to be true.

It would seem that one or more of the magpies have learnt that,

1.chicks are a good meal and

2.has put into practice skills that were previously used to snatch a few fish scales and

3.has worked out a method of timing the attack when the ospreys cannot retaliate.

Unless KL and Unring can think up a counter-strategy it is very likely that the magpies will try again, and with persistence might very well be successful again.

If anything the arrival of the second chick today was more exciting than the first because unusually it happened in daylight hours when its progress could be seen. The second egg showed signs of a hole this morning which enlarged gradually. Then at five past three in the afternoon the top broke off and a wet skinny little mite squirmed its way out of the lower shell. It looked so small compared to its sibling despite only being a day younger. However, wobbly neck and all it managed to take its first feed of fish around 5 o’clock.

As we hoped, what started as a pin prick in the shell yesterday has been worked on by the chick chipping around a metaphysical dotted line through the night until at some point the egg broke open  – and there our chick was, hatched!  Some of our staff and volunteers got up early to switch into the webstream. Both Unring and KL were being very good parents so it wasn’t that easy to get a definitive view………

Thanks for this Ralph!

A cherry when it’s blooming has no stone.

A bird when it’s pipping has no bone

A ring when it’s rolling has no end

A baby when it’s sleeping has no crying.

May 18th, and today was the first likely date for the hatching of the first egg, laid April 12th. Our volunteers at the big screen at Whinlatter were looking extra closely at the eggs every time KL lifted off them. Particularly as since yesterday evening she has appeared to be excited, snuggling the eggs with extra vigour, turning them more frequently and twitching her wing feathers. Was something tickling her tummy, could she hear a cheeping coming from under the shell?

At mid morning she stood up and we could see the first laid egg clearly. It is easily recognisable as it became stained a light fawn colour with the wet manure they were bringing up for nest lining when it was laid. (The other two were surrounded by clean moss and so have kept their maroon and cream hue)

As we stared we noticed a tiny dark mark, not much larger than a darning needle hole and the slightest of movement behind it. KL had seen it too and leaning forward flicked off the tiny piece of shell that had been dislodged with the tip of her beak.

Our first chick had started its rigorous escape routine!

Of course, whether it will succeed or not remains to be seen. KL will not help break the shell because only chicks strong enough to break out are strong enough to survive. The morning will give us the answer.

No 14 is still on the move beating an aerial triangle marked by Milnthorpe, Coniston and Ulverston.

In the past few days he has passed over  Ingleton – Windermere -Millom. Has been seen at Leighton Moss and has appeared on Killington Lake on the M6. Satterthwaite in Grizedale Forest and Pennington Reservoir (Ulverston).

Nests are integral to the ospreys’ relationship to each other over the breeding season and their long term bonding process. A young pair, on meeting will make a ‘honeymoon’ nest often fairly rudimentary, as a trial run for the next season. It is important to hone nest building skills, work out site suitability and decide who does what.

Males do a lot of the building, but depending on personal inclination a female will also bring up sticks and lining material. Our first female SX would bring up huge swags of moss from the forest floor and then swim around in it to fluff and squash it into shape whilst our second, ‘Mrs’ barely lined the nest at all, although brought up the occasional stick. KL seems to strike a balance between these two extremes, but this season has taken to bringing up swatches of black plastic bag to be intertwined amongst the sticks. Both birds will arrange, and re-arrange the material, singly and together, the point being that it is part of their relationship to cement co-operation – important when you are only together for about 5 months of the year. 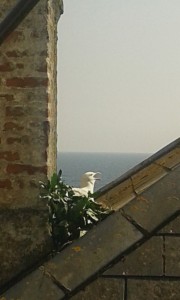 What to do whilst sitting on your nest.

If you are KL this is what you do

If you are Unring

Wonder what the neighbouring  owls do? 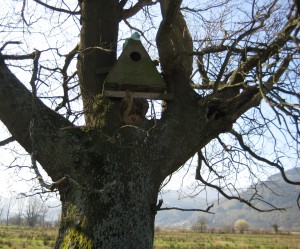 On the nest all is still going to plan. Working out the dates, eggs were laid on April 12th, 15th and 17th. Incubation is variable and can take between 36 and 40 days. This brings our earliest hatch day to next Wednesday, May 19th. But as we know, it is a mistake to count ospreys before they are hatched.

Last year the middle laid egg of the clutch was seen to start hatching, the little egg tooth glimpsed sawing its way along a crack line, but after a few hours it ceased to move. Nature seems to put in all these hard physical hurdles, hatching first food mouthfuls, fledging, fishing, flying, and migration, to ensure only the strongest make it to adulthood. If we look back at our own ancestry we are the same – the sum of all the people in our blood line that have survived birth, illness, injury and starvation with ourselves the culmination,  a tiny triumphant speck of life at the top of the pyramid,  ready to pass on the genes to another generation.

In the fields the Spring story repeats, and like a wave of  cream foam on a green sea of grass, lambs are gambolling in all the fields and enjoying the fantastic weather of the last 5 days. 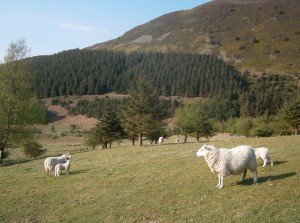