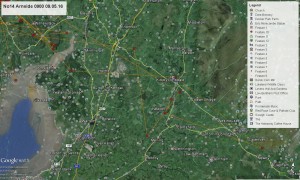 Just been watching an osprey at Leighton moss, it has a transmitter on its back! Wondered if it was 14? Was at Leighton at six pm 09/05/16!

It could have been although this evening it’s on the west coast above Askham in furness
Yesterday it was North West of Cartmel which, in osprey terms, is a short flight across the estuary to Silverdale so my money would be on 14 visiting leighton moss !

Just downloaded Number 14. Map attached showing where he was this morning. The dot near Arnside was 0900 so could well have been spotted at Leighton Moss later in the day.

And then it was midnight, when all ospreys should be cat-napping and people asleep!

Well spotted Larissa but where will that bird turn up next!

With No 14 whizzing around the countryside it is easy to think that nothing is happening on the nest (Except of course the miracle of growth within the egg – but this, like a birthday present. is hidden until opening day.)

KL has been sitting very tightly, Unring has been bringing in fish once or twice a day and all seems calm.

However, on Friday the calm was shattered. At 14.00 Unring seemed rather uneasy, moving around on the nest side and looking up to the skies. We wondered if he could see a passage osprey far above – but after a while all seemed to go back to normal.

Then at about 16.30 he flew onto the nest site with a large trout, which he left lying on the side and flew off again. Unusually, KL made no move to take it but sat firmly on the eggs.

The next thing we saw was a pair of legs swooping over the nest. Heavens above! – one of the legs had a blue ring on it.

Unring followed straight after this landing with a thump. As he turned around the blue-ringed osprey landed right on top of the fish. It grasped the fish,  reared up with all its head feathers raised and stared belligerently at Unring. KL stood by her man and with great presence of mind bit its foot, but this unfortunately galvanised it to grip the fish tighter and fly off in a cloud of wing, scale and glare. At which point KL bit Unring.

But it was too late, the dinner hi-jacker had gone, jigging through the trees up the beck, leaving a ruffled and indignant couple.

Since then we have had a look at the footage and the Ring number seems to be Blue FF6.

This tallies with a record of a bird ringed in 2015 in Loch Doon in Galloway.

Yesterday, not content with arriving back to familiar rivers and fields our number 14 decided to make a day of it, go on a tour and visit the Foulshaw relatives on the way.  If you live in the Lakes it is one of the joys that at any time friends and family turn up. ‘Just passing and thought I’d drop in!  Well, if you’re making coffee…..’ You know the sort of thing, 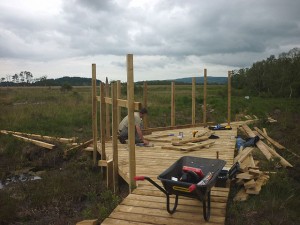 So at 8.00 – 9.00 he was cruising over Windermere, flying on 10.00 – 11.00 over  Ulverston. At 11.00 – 12.00 he reached Foulshaw Moss. Of course YW Male is not a blood relative, hatched as he was to No-ring and Mrs in 2008, but he and his Kielder hatched wife have a very fine property which needed to be inspected. It is unlikely though that the young visitor was met with welcoming wings but rather with cries of rage, – seen as an intruder rather than a prodigal cousin. 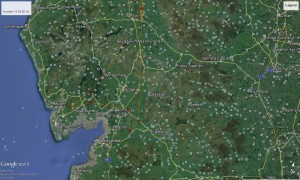 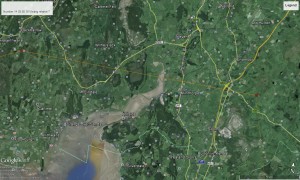 Here are the maps that show the flight path of our No 14 after yet another epic journey back for Bioko. 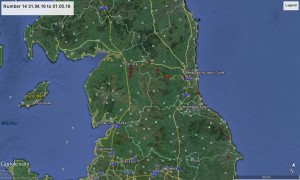 He flew North up the East coast of England to Newcastle and then West across the Pennines somewhere near Haltwhistle. Then he turned South following the Eden, roosting on the night of April 30th in a small wood just North of Armathwaite. 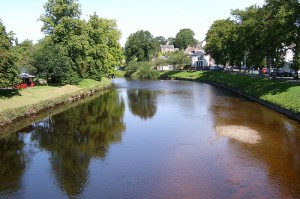 At 10.00 on May 1st he was travelling towards Penrith

By 21.00 he looked to be roosting just to the east of Whins pond (just east of Penrith)

Last year he spent a lot of time in this area. 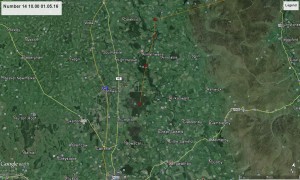