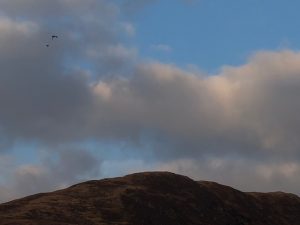 The Lake District Osprey Project partnership has always been firmly embedded in the community, either directly, as staff and volunteers or as part of the networking resident population who observe and take joy from the natural world. Without this well-spring of support the Project would not have started and could not continue to enhance the bio-diversity of our beautiful National Park. And we would not have these pictures.

The question is of course, is this report our male bird Unring or another on its way up to Scotland? We’ll have our eyes peeled on the nest and surrounds this morning.

Just reporting sighting of osprey over Cogra Moss between 19.10 hrs to 19.20 hrs this evening 30th March. The bird was being mobbed by crows flying high above the lake by about 500ft.  It circled wide of the lake for a while diverted by the crows. Once it was clear of the crows for a short while it paused then dropped about 500ft right into the water. An attempt that appeared to fail as it re-emerged without fish to be mobbed again by crows. This was also witnessed by two trout fishermen.  They said it had been seen about five times recently.  I attach a few photos  taken with iPhone X. 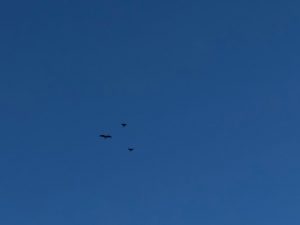 So moving well through the heat!

A sharp-eared member of the team was walking around Ullswater last Sunday and heard an osprey calling. It was in the trees just beyond the Glencoyne car park. They tried to identify from the calls where it was, to get a photo, but there are too many trees! It was calling for a good 15/20 minutes before it seemed to fly further away. Still no signs of our pair though. 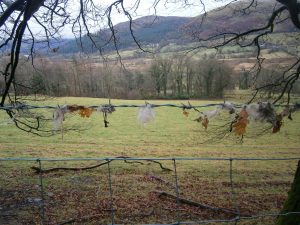 However, even when the valley still looks so bare all the ingredients are there waiting for the Spring sun to shine again. A fence full of nesting material for instance!

Yesterday the team went up to Dodd to see if there were any signs of KL and Unring – but no. However No 14 still flies onwards using a direct route this year and 2 days ago crossed the border into the South of Algeria.

Here is the Weather in Laghouat,, central Algeria today 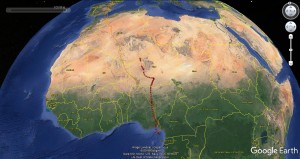 Great news – our satellite tagged osprey No 14 has started his migration back to the UK, which means that probably his parents KL and Unring are also on their way. We are keeping our eyes open for them, although it may be some days before No 14 arrives as he has a 4000 mile journey from Bioko, Equatorial Guinea rather than the shorter 3000 miles from Senegal where KL spends her winter.

For human beings the Lake District Osprey Project will open on Good Friday this year. Opening times are 10.00 to 17.00 at both Dodd Viewpoints and Whinlatter Visitor Centre. 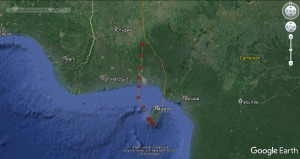 Here is the latest map from 21st March showing No 14 flying across Nigeria.