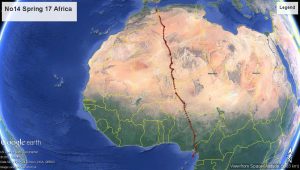 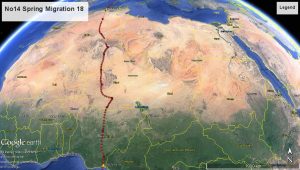 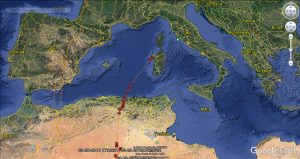 He never ceases to amaze! No 14 was hatched and satellite tagged in 2013 and from these beginnings has proved himself an exceptionally fit, adventurous and intelligent bird; one that has captured the imagination of every armchair traveller in his fantastic journeys; one that uses the whole of North Africa and Europe as its Playground.

A resume: In his first migration back in 2015 he travelled from Bioko across the Sahara to Tunisia, crossed the Mediterranean via Italy turned East to skirt the Alps and then spent a few weeks exploring central and northern European countries and Scandinavia, before returning home to the Lakes. In 2016 he cut the journey shorter by travelling straight across the Alps , through France and back to South Lakes. In 2017 he took the most direct route to the UK as you can see in the top map. This would seem to follow a pattern of increasing maturity, taking the most efficient route as hormones for home-making start to kick in.

However, as we saw from last summer, although No 14 showed great interest (or was a great nuisance) around other breeding sites in S Lakes, he did not settle down and it looks like this year he is keen to go and revisit some old stamping grounds rather than catch up with any lovers in the Lakes – see the second map where he veers off his Westerly course to Tunisia.

The second and third map 2018 shows him having made the Sahara crossing successfully, currently whipping across the Med to Sardinia . Where will he fly next? We have absolutely no idea!

To our great delight who should we see but this bird on our screens, busy tidying up the nest. However, trying to do a full Saturday morning workout with sticks, moss, bark and digging on top of 3000 mile of jet lag proved a bit too much and he was not seen again after 11.00. Probably having a snooze out of the wind somewhere.