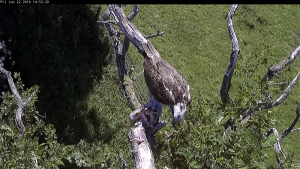 As the summer has progressed we have been expecting to see other ospreys exploring the area. These will be birds like our No14 who are not yet mated and have not decided upon a nest site. As we know they can fly considerable distances just having a look around. Ospreys are incredibly nosey about other osprey nests – who knows but they could be abandoned, poorly defended or a potential home for the next year, so always worth checking out.

Unring must have been less vigilant than usual because we caught this bird sitting eating a very large fish on the branch beside the nest on Friday 22nd June.

It has a Blue ring on its Left leg so it is probably a Scottish Bird. However, here the trail goes cold. So far, we have not been able to trace the letter/number CA3. There appears to be no record on the internet lists so we are making enquiries through official channels. (It is not a local post code!) 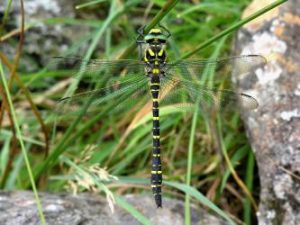 If you miss the ‘Kersplosh!’ of the hunting osprey look a bit closer to hand to witness aeriel chases at least as exciting.

Dragonflies are one of the most spectacular insects of the summer months, the rustle of their wings whilst they hawk for unwary insect prey amongst foliage is as typical as their strikingly colourful bodies. One like this was spotted sitting on a shale bank by a Volunteer, on their way to the Upper Viewpoint at Dodd.

Most Dragonflies spend a couple of years underwater but these Golden Ringed ones spend  5 years of their lives there as ferocious larva. Tadpoles and Toadpoles beware! They have a few weeks flying free in Oriental splendour before the cycle starts again. The biggest is the female Golden Ringed dragon fly, her length marked like a black  finger set with with a series of multiple wedding bands. After the nuptial flight she lays her eggs by hovering over shallow water and vertically stabbing her abdomen into the stream beds.The acid upper waters of Skill Beck or the margins of the marsh land lagoons would do equally for a nursery.

At Whinlatter, smaller but in greater profusion, Red Damselflies Pyrrhosoma nymphula are darting in linked heart-shaped pairs around the ponds. But if you look deep into the water you can sometimes spot the next year’s generation showing their true nature stalking the mud in search of dinner. 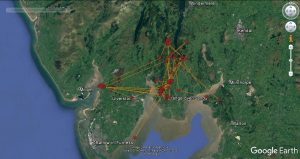 Here is a map of the past week, where 14 can be seen to have been zig-zagging about various parts of South Cumbria. He has been  at Esthwaite, and Roudsea nest sites, fishing in the estuaries and making an occasional visit to Leighton Moss RSPB Reserve.https://www.rspb.org.uk/reserves-and-events/reserves-a-z/leighton-moss/

As 14 flies over Leighton Moss with bird’s eye view, he will spot quartering marsh harriers, families of bearded tits, twirling their tails and moustaches around the stems of their watery forest, and possibly the booming bittern lurking in the largest reed bed in England. As we have only a little reed bed on Bass it cannot support all these specialist habitat birds. But, after last year’s surprise breeding, this year we are still having good sightings of a female marsh harrier interested in the site. With the increasing numbers nationally they may well use it another year. 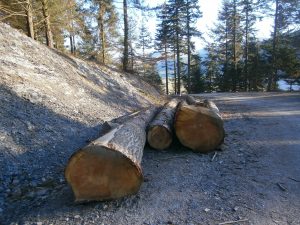 Those of you visiting Dodd Wood will have seen the results of a winter of tree management. The Forestry Commission manages its woods for timber, people and wildlife. The trees are a crop, albeit one with an 60+ year growing cycle!
The pride of the timber stock are the Douglas fir trees, rising straight as paint brushes colouring the sky.
Their Native home is the Canadian West Coast, so they thrive on the similar amounts of rain the Lake District generally provides. Unusually, although a conifer, they are classed as a hard wood so, together with their size they are prized for special projects.
This year for logs such as these, some are going to the Baltic Ports to be used as part of a project to restore port infrastructure, beginning with the dock in Hamburg, Germany.
Others are being sent to Portsmouth and Plymouth to be used as masts for tall ships and a shipment is being sent to Boston Mass. to be used in building projects in America.
Time to start becoming an arm-chair tree traveller! 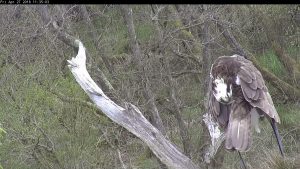 At the beginning of the season there was one – Unring – sitting all alone, waiting for KL.

On May 6th there were two ,Unring and a young female with a long streak on the back of her head. ‘Longstreak’

A young male bird, probably Blue 2H, has been spotted on the Lake. As he starts visiting the Southern waters of Bassenthwaite,  there were three.

This week another female osprey has been seen also visiting, in his company – so now there are four.

When in the neutral territory, under the Lower Dodd Viewpoint, they seem to be getting on amicably, fishing and playing on the wind together. For long periods they have been seen sitting on the shingle shoals that have emerged as the Lake has receded. With the sunshine maybe it reminds them of balmy sandy spits of the West African estuaries.

However, Unring is still vigilant over his nest, defending it vigorously with talons outstretched against 2H and his new girlfriend if they fly in too close.  ‘Longstreak, however, is still inclined to sit back and watch the tournament rather than helping him.

And where does 6 come in?

Staff travelling around the Lake this week were excited to see no less than 6 red kites flying above. Until now we have only seen the odd one at long intervals. Their butterfly wing beats, colours buff, red and brown, glinting in the sun against a blue sky and the constant re-adjusting of their forked tails to wind and thermals make them one of the most beautiful raptors. Where have they come from? As we are mid-way between 3 re-introduction sites, Galloway, across the water, Gateshead, across the Pennines and Grizedale, our South Lakes sister forest, they could have come from any of these. Keep a look out for them and let us know if you can see any wing-tags. 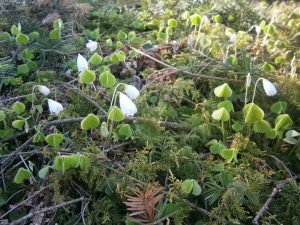