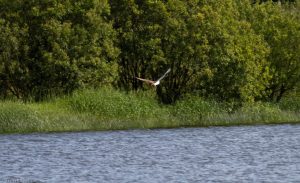 Blue 400 and Unring are still to be seen around the valley together with other migrating ospreys , so it is worth taking your optics and having a look! Let us know if you see Blue 400 catch a fish!

After a much wetter than average August it is time to take stock of the Bassenthwaite osprey family.  Blue 400 has had a difficult time learning to fish after her very successful fledging. This has not been for lack of trying!

Rain in itself does not bother ospreys, although they always look very bedraggled and miserable in a downpour with the rain dripping off their beaks. The problem is in the quality of the water they are trying to fish in. Rain on Lakeland’s bare fell tops loosens soil already eroded by centuries of overgrazing and mining and the many feet and bikes that churn up the paths. Streams in spate, with little in the way of bigger vegetation on their banks pull away more earth and this all rolls down into Bassenthwaite. Indeed Bassenthwaite, having one of the largest catchments, is the Lake most liable to silt up. Estimates put this at being between 15% and 20 % faster than it should. Nearly every day this month we have seen the Lake water turn milky brown spilling from Newlands Beck and the Derwent River. Ospreys hunt by sight so murky water inhibits them. (It must be uncomfortable for the gill-breathing fish as well) . Rain also creates flooded areas in the marsh and Blue 400 did much of her practising in these clearer lagoons. Wonderful viewing, with her wings held back like an avenging angel’s in classical pose, head forward til the last second and then feet plunging in the water. However, lagoons will only have a very few stranded fish in them so we have not seen her catch there.

It is always difficult to know how much behaviour is instinct and how much learnt. Fishing itself we know is instinctive, as has been proved by the re-introduction programs of osprey to Rutland in the early 2000’s and now at Poole in Dorset. Young birds are transferred to large open fronted cages so they can fly over the water and supplementary fish are posted in from behind a screen to keep their energy levels up. (A surrogate Dad technique). We also know also from our own observations that osprey Dads encourage their chicks to fledge initially by holding out fish as they fly past, so Blue 400 will have been watching both parents’ fishing patterns and picking up skills that way. At 5 weeks she was a big strong bird but has she caught enough and fed enough to make the migration?