Over the past week there have been signs of a change of behaviour in the birds on the Bassenthwaite nest. After round-the-clock incubation with both Mum and Dad doing stints with only the occasional upset of a visiting passage osprey or corvid intrusion, suddenly all if fired up again. Dad is bringing fish to the nest and instead of taking it away to eat, Mum is hoarding it. It’s one of the best things in the world to watch when she at last stands up and after tearing off a minute portion of flesh, dips her head down into the nest; a sure sign that she has offered it to a chick. If all goes well then the chick instinctively grabs at it and down the red lane it goes. After that it becomes the bottomless pit, that so many parents will relate to. With more than one infant the parent’s days are cut out for them with fishing, feeding and keeping the little ones warm. Roll on some less chilly days! 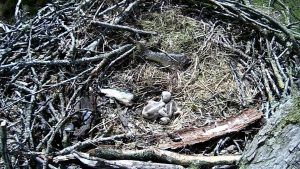