It is easy to identify KL because of her white leg ring. Hatched in Scotland in 2009 and photographed twice in Senegal before her first breeding season here two years ago, she has an impressive verifiable history. It is more difficult to positively ID the male bird as her man from last year as he has no leg ring.
However, when we compare his head markings with 2014 video it looks to be almost certain that he is her faithful swain. As a clincher their obvious rapport from their moment of meeting should prove to the even a science based stickler that he is the one.
Often returning males, even of long established pairs, are a little nervous of approaching their larger ladies at first and will flatten themselves with wings half open in the bottom of the nest, or they will sit with their backs to each other.
Ours are already they are sitting side by side, quite relaxed, for long periods of time. He has been catching fish for her and actively holding them out for her to grab, when he lands on the nest, Their interaction is so slick that can miss the moment if you blink. He has also been bringing up lots of sticks and nest material, covering the layers left from last year, and the moss that we put on. Below Unring on left with brown front, KL with streaky breast on the right. 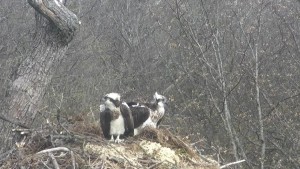