KL laid another egg at 11.00 on Thursday 23rd April. As you can see it is heavily pigmented at one end. In general birds that have exposed nests lay cryptically marked eggs to break up their outline and camouflage them against predators. Hole nesting birds’ eggs are usually white or only slightly spotted. Another function of pigmentation is to re-enforce the calcium shell, making it stronger. This is probably a good thing when you have a bird like Un-ring for a Dad. His stints at incubation 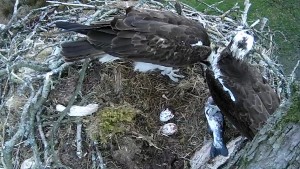 are best described as gyroscopic – he cannot sit still. If he is not fiddling with a stick or shredding moss he is getting up, sitting down and turning around. And in between he is head down twirling and spinning and rolling his eggs from one side of the nest cup to the other, like a replay of Alice’s croquet game, with his legs as the hoops. It’s quite un-nerving to watch, although he is very careful to keep his toes curled and his talons well out of the way.