One of the tenants of detective novels is that it is easy to see what we want to and not what is actually there. So when the third egg in the nest disappeared seemingly under our noses this morning (Monday) we had to do a double take and really look hard for clues to explain the mystery.
1. Chick No1 (Gale) hatched on 27th May – no problem
2. The second laid egg, recognisable by its strong markings showed a hairline crack on Friday. On Saturday morning it was rocking and movement could be seen inside through a hole. By the afternoon things had slowed down and as we said, rather pessimistically, we hoped it would hatch in the night.
3. Low and behold on Sunday morning – there was a chick (Oscar) – whom we immediately assumed had hatched from the second egg. But had he?
4. At 07.30 on Monday morning there were 2 chicks and one egg on the nest. At 10.30 there were 2 chicks on the nest and no egg visible.
Let’s have another look at the hatching picture and the markings on the eggs. 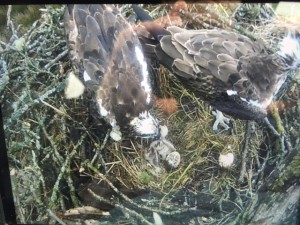 Suddenly it becomes obvious. The egg that is still intact in the middle of the nest is the strongly marked egg number 2. The shell on the right nest side is lighter in colour and is egg number 3. This is what Oscar hatched out of. Elementary!
Sadly then, the chick in egg number 2 never made it out of the shell. This is not an uncommon occurrence with birds. A chick that is not strong enough to get out of the shell on its own will always have some weakness or deformity that would have prevented it from functioning normally.
But what happened to the egg itself? Well, we are still not sure. Possibly, like infertile eggs in previous years, it is buried under the new nest material that came in and may well surface again. Or maybe one of the adults, sensing that it was redundant, flipped it out of the nest.
At the end of all this, despite the loss of one egg, we have 2 healthy chicks and two devoted parents.
Sit tight for the night KL. There’s a storm with wind and rain rocking the whole valley.