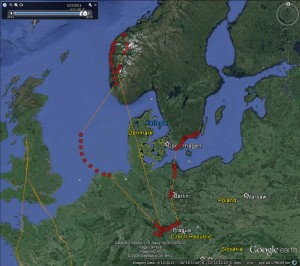 Meanwhile Number 14 having crossed the Sahara Desert twice in two years, entered Europe via Italy on the 3rd of May, then progressed north to Czech/German border and  has now completed three circular tours of Europe. The first two took in Denmark and Sweden, the third included Norway. Whilst flying to Norway via the North Sea he was only 175 miles from the British coastline. He has now visited 28 different countries since leaving these shores – brownie points if you can work them all out!

Over the last few days he seems to have taken a break remaining in central Europe.