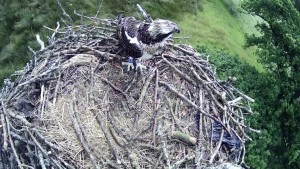 To go back to our tyro flyers. After a shaky start V1 (Oscarina) has been gaining confidence and strength. She, sensibly, did not ground herself again after the initial flight and spent some days hopping from tree branch to tree branch. Her cries of hunger were heard by Dad and he dropped a few fish her way so she could practice jumping to the next branch. At last she made it back up to the nest and now is making short circular flights, keeping ‘home’ well in sight. 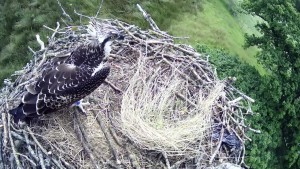