First Day back for volunteers and First Day for an osprey sighting!

So, that’s made up for the very wet weather today.

The bird was first seen at 13.10 on the live CCTV at Whinlatter by a sharp eyed visitor. As it was sitting on a branch and not on the nest we could not zoom in to identify it. Was it one of ‘our’ birds? With a bit of jiggling of the camera we got a closer view and we could see it had rings on its legs. Was it our female KL or not? Last year both KL and Unring arrived on April 7th. The spell of good weather may have encouraged some birds to arrive earlier and some have aleady made landfall at Rutland water and Loch of the Lowes. We were glued to the screen, watching it scoff a fish for the next four hours and willing it to make the jump onto the nest where we could read the letters. But no such luck. Perhaps it will appear again tomorrow or maybe just disappear up North.

At Dodd the highlight was the appearance of a number of Siskin. This little bird has not been seen in any numbers for some years there and the males’ bright yellow added a flash of colour to the rainy day 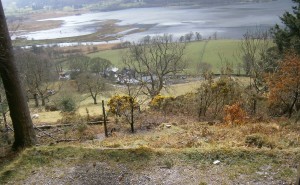