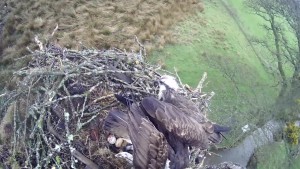 Well, our beautiful birds are now the proud parents of two eggs. As happens so often with these creative events, KL produced this one sometime in the night or early this morning. Here KL is getting off the nest so that Unring can have his turn at sitting.You can see which is the new egg on the left, as it is still is a bright pristine colour. The earlier one has regrettably taken on the khaki hue of the wet manure from the field that lines much of the nest. The incident with the black plastic seems to have been resolved with more nest material being plonked on top. Yesterday, it was a source of great consternation for both birds and watchers. In a series of constant rearrangements the egg found itself sitting on the plastic, rolling under the plastic, having the plastic pulled out from under it, and being wrapped up in the plastic.However, no harm done! 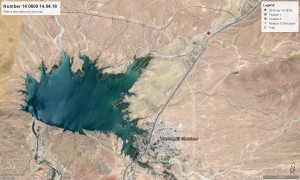 No 14 speeds onwards. At 06.00hrs on Thursday 14th he reached the area of water we thought he was heading towards, a large reservoir with the dam at Manbaa El Ghozlane village named rather beautifully ‘Fontaine des Gazelles’, very lush and green. His tracker sign shows him over a dry river bed but probably there is some water in it at this time of year coming through from historic village and dramatic Gorges d’El Kantara. And with water comes fish. https://fr.wikipedia.org/wiki/El_Kantara_%28Biskra%29  With only one range of mountains between him and the coast he has crossed the major hurdle of the Sahara!

Today, Friday 15th he has forged on and crossed the Mediterranean in one swoop, landing in the afternoon SE of Genoa. He is such a strong bird! This is slightly West of his path last year, perhaps influenced by the south easterly breeze. With a clear sky tonight his bedtime temperature is a clement 15C although it looks to be slightly more overcast tomorrow.