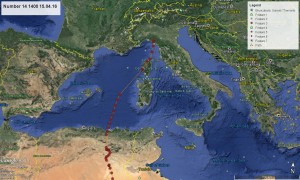 Regressing to fill in details the journey-line on the map for the 14th and 15th of April shows our bird in the Med has a great deal of sense. Rather than an all-in-one swoop across the 300miles of sea from the African coast he roosts on the Island of Corsica on the night of the 14th and moves onto Genoa on the 15th.

Starting on the 14th in Algeria he goes out to sea near the La Salamandre National Park at Jjijel. This is a particularly significant place for an osprey, although he may not know it, as  the bay westwards was nominated last year as a future marine protected area of critical importance because of being a spawning ground for major commercial fish species.http://www.kherdja.com/detail-guide/5601-parc-national-de-taza.html

A third of the way across the Med he veers northwest to reach  Corsica (not sure at this juncture if the line without dots represents some night flying)  passing near the Sanguinary Islands ( Islands of Blood) towards Ajaccio. In the past a migrating osprey might have caught a fish in the Gravona River that flows through Ajaccio but now that river is nearly entirely consumed as the city’s water supply.

He rested just west of the town and the next morning saw him winging his way along the coast over the many white sand beaches to the north point.  Might he have met up with Jane’s bird? (see March 15th post)

The last hop took him straight North to Italy, just East of Genoa. This is again another very significant place for marine wildlife as it houses a huge Aquarium whose mission is ‘to educate and raise public awareness as regards conservation, management and responsible use of aquatic environments.’ The magnificent biosphere, housing tropical plants, such as might grow in Bioko, was created by R Piano in 2001 – the first year that ospreys nested on Bassenthwaite.