Yes! A third egg for KL and Unring. This time not laid under the cover of darkness but was witnessed by both visitors and staff, arriving at 11.25 this morning. It was not perhaps the calmest of confinements as Unring insisted on being present at the ‘birth’. This is not something we have seen before as usually the female gets on with it by herself.

KL was obviously in the throws of labour when Unring flew in, moved her off the eggs and sat there himself. KL, pushed out to stand closer the nest edge, with her tail overhanging her spouse, did a sort of  slow knees bend. When she stood up there was the egg. Again it was very beautifully marked with large red blotches.  The pair soon swapped over again and she commenced brooding all three. Congratulations to John who had his finger on the recording button and managed to film the sequence. Just ask to see the clip when you visit Whinlatter CCTV screens.

Three eggs is a full clutch, although occasionally some females will lay a fourth egg, or in exceptional circumstances a fifth or sixth, if the first ones are destroyed. However, often these are smaller and don’t hatch. Up until yesterday the pair were mating, indicating there was still another egg to come but we would expect them to stop as soon as the clutch is complete.

Update on third bird. A third bird visited the nest yesterday and was chased off by Unring. Whether it is the same one as that of a few days ago we have no idea! As a reminder that we have had other pairs trying to establish themselves on Bassenthwaite in the past, this picture is of a ‘honeymoon’ pair who built a little love nest in 2011. But sadly they 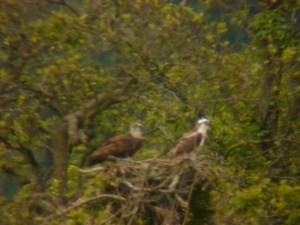 Other sightings One of the Valley farmers had an interesting sighting of ospreys in the plural just before Easter, counting six in the trees along the marsh beck. This seems to back up our theory that the spell of fine weather a week before gave a window of opportunity for a lot of passage ospreys to arrive slightly earlier than average. They would all have been moving further North. It also shows that osprey numbers are steadily increasing.