From Geneva our bets had been that 14 would have flown either West across France towards the UK or East back to his stamping grounds of last year on the German Czech border. But no he has surprised us all again by going to explore South!

He has followed the edge of the mountains to Grenoble, ‘Capital of the French Alps’ and has spent the last few days there on the River Drac. (see where his tracker has showed us overlaid red dots, the latest being 22.04.16))

Grenoble is on an alluvial plain of the Isere and Drac rivers – so this photo is the kind of view a bird would see flying over. 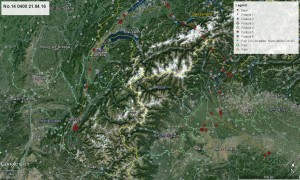