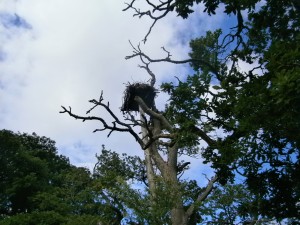 Do you have to wait until the adults are away, before you climb up to the nest is a question often asked?

In fact, either KL or Unring always have the nest in sight, even if they are sitting hidden in the alders or on top of the tree. So, when humans appear we are viewed as predators by the birds. KL was on duty that morning and immediately flew up screaming at us and warning her chick to lie down flat. Because the young birds have little muscle power they rely on their camouflage to protect them, in theory staying still and quiet in the base of the nest cup. (However, it’s tempting to take a sneak peek out to see what is happening.)

In general, this works to our advantage as it means that the adults fly away from the nest and the chick does not struggle and hurt either itself or hopefully, us. On Saturday only KL was on the scene at the beginning but was soon joined by Unring who had been off to catch a fish. He was determined not to let go of this and circled around clasping it, until the excitement was over. Whereupon, he ate it himself!

Meanwhile, the tree climber, under license, climbed up to the nest and popped the chick into a soft bag, which he lowered on a rope to the ringer at base of the tree. He then prepared for a long and rather uncomfortable wait, perched on a side branch, so that the adult birds do not land on the empty nest. It seems that, using ‘bird psychology’,  if the chick is back in the nest when we all depart from the scene at the end of the procedure, the adults believe that they have chased off the predator and see themselves as victors. Obviously ringing is a one off occurrence and there is little danger of the chick being abandoned by its parents as the bond is very strong at 5 weeks old. However, constant/ multiple human disturbances are a far greater threat and often will result in abandonment at the time or a nest move the next season. 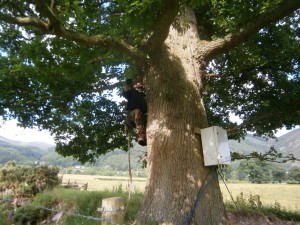 Whilst all this was happening the second tree climber went on a more hazardous climb into the next tree where the zoom camera is situated for operation lens clean. All this season there have been large blurry blobs on the zoom camera spreading over the picture, possibly caused by the calling cards of the resident spider, or a spontaneous growth of algae. The zoom camera is out on a limb so it took some heart-stopping contortions before at last a hand with a cloth poked out between the oak leaves and started the cleanup.

Later we were very pleased to see that his efforts had been entirely successful and there is again a clear view at all distances on the screens at Whinlatter.

At the end of the ringing procedure the chick was popped in the bag again and hauled up to the nest where the climber there gently placed her back in the centre  to await her parents and a fishy brunch.

Our thanks to the tree climber team for such a smooth and successful operation.