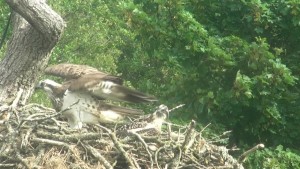 7 weeks old and everything is coming together for Bega.

Soon she will be making her first flight and she has only two options then – fly or crash.

Muscles have to be well developed. Flapping work-outs and making jumps across the nest cup builds up stamina and coordination. Plumage is vital. Preening means every feather is fully functional. But her primary pinion feathers still fall short of covering her tail feathers. Determining some landing spots is a good idea.

Here is today’s diary from the Whinlatter screen – how close do you think she is to a first flight?

11.45 Unring arrives with another small perch, all alive Oh and hopping around the nest. Bega stamps on it, kills it and eats it.

11.55 KL leaves nest. Bega begins a session of vigorous flapping. She faces into the wind for lift and hangs onto the sticks with her talons to prevent actual lift off – then she lets go. OOo -errr! A jump upwards and backwards, landing on the far side of the nest.

KL arrives and eats fish tail. She feeds Bega some of it. KL departs

14.15 Bega starts another session of fast flapping, jumping up at least 60 cm.

14.20  Bega really really wants to be going off the nest. She stares intently at the nearest branch of the tree and flaps deliberately as she shuffles closer and closer to the edge of the nest and then over the edge, sticks slipping into the void under her claws. At the last second she loses her nerve and scrabbles backwards. 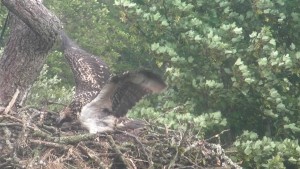 But, not so easy as it looks!