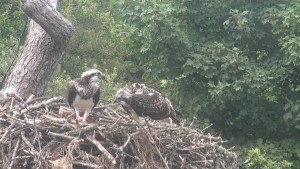 The transition between child and adulthood is marked by the gradual assumption of independence, together with a diminishing need for parental support. Getting the balance right is a tricky business though! Over the past week Unring has been bringing fish directly to Bega on the nest, rather than waiting for KL, as she is now quite capable of subduing and eating a fish without help. Indeed, if KL turns up Bega has shown signs of being quite snappish towards her Mum and definitely hasn’t wanted to share the meal. However, as every teenager knows, there are times when being ‘grownup’ palls and a bit of TLC is needed.

So, here is KL feeding her big daughter on Wednesday for maybe the last time before becoming redundant as a carer for this season.

THE WEBSTREAM CLOSURE   Since then Bega is only visiting the nest once in a while to collect fish from Dad. Often she flies off to her comfortable perch amongst the alders to eat. She is spending her nights away as well. We will be switching off the webstreaming this weekend because the best place now to see her and her parents is from the telescopes on Dodd. At Whinlatter we will still be watching the wider area through the CCTV and have lots of footage of B’s miracle survival and amazing growth