Now here’s an interesting map! It shows Bega, to the west, No 14 to the east and the last known position of our missing chick VO in 2015.

Bega seems to be exploring the coast down to Guinea Bissau, This is a low lying country – highest point 984′ (300M) above sea level,  with a large estuarine and island mangrove coast line. This initially looks good for an osprey population but according to statistics it is one of the poorest nations in the world due to constant political coups, and there are severe problems with agriculture and overfishing. How, might this impact on fish eating bird life in the area? However, Bega has already done better than V0, the chick from 2015, who we lost transmissions from further North last year(red and yellow spot on N Senegal border).

No 14 has flown from Burkina Faso  through Togo and Benin to Nigeria and looks to be heading back to Bioko. Hooray! 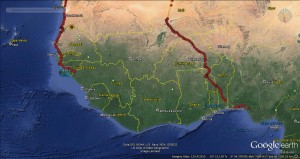