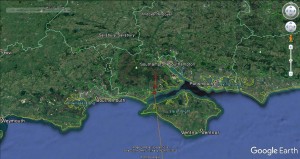 At 3pm on Tuesday 11th April No 14 crossed the Channel and over the Isle of Wight. – (which will make at least one follower very happy!) The northernmost red dot  on the mainland is at 6pm on the 11th April

Interestingly the sat nav line passes over Freshwater bay near Farringford House, the long term holiday home of  Lord Alfred Tennyson, whose poem ‘The Eagle’ could just as easily have referred to ‘The Osprey’ (depending on how good a naturalist he was). Living from 1809 to 1892 he spanned the time the last Osprey bred in England in 1872, perhaps even witnessing a last migratory flight over the island. Tennyson was also a good friend of the Speddings, spending time at Mire house, overlooking Bassenthwaite Lake and the site where, a century and a half later, the first ospreys returned to England and where eventually No 14 was to be hatched.

HE clasps the crag with crooked hands; Close to the sun in lonely lands, Ringed with the azure world, he stands.

The wrinkled sea beneath him crawls; He watches from his mountain walls, And like a thunderbolt he falls.

Which just about sums it up, I think!