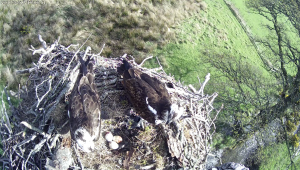 With  watery sun on her back KL produced her third egg – first seen on Bank Holiday Monday 17th. This is generally considered to be a full clutch – although very occasionally a fourth egg can be laid. Maya at Manton has done so this year.

Straight after laying our pair mated again, which was probably a reaction to the third osprey that has been here for the last week and had just caught a fish in the Derwent River mouth.

A bit later KL went down to the Lake shore and had a good bath, coming back to sit on the nearby tree branch preening each feather, whilst Unring sat on the eggs. A few crow chases later she settled down again and the day went by like clockwork with the two alternating incubation shifts.