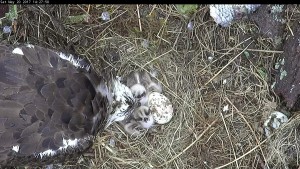 And here is a sibling hatched just about 24 hours after the first. Initially seen at 14.30 on May 19th, Friday after an exciting morning’s viewing following the progress of the hatch from the first chip to first crack to the eventual struggle to get out of the shell. The new little body, despite its gruelling hours escaping from the egg was programmed to respond to the offer of food and had its first mouthfuls whilst it was still damp!

The third egg could hatch at any time over the next 4 days according to the dates – no signs today.