Our chicks are now about 16 days, 15 days and 12 days old and are all doing fine. Despite their size difference KL is feeding all of them and all are developing as they should. They have lost their early white down and are now at the stage when their first feathers are starting to sprout (not a pretty sight!) Often described as reptilian at this age they are actively crawling around the nest using both legs and wings to manoeuvre themselves. 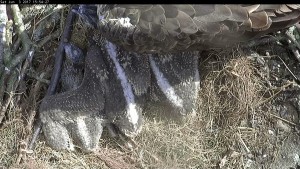 The picture above appears to illustrate the saying ‘birds in their little nests agree’ with the older sibling’s wing draped affectionately around the youngest. However, those who have been  watching on the webstream will notice that angry looking spats occur quite frequently. These generally happen when the chicks rear themselves up, searching for food. As with most young chicks we think it is probable that they have a limited focal length, focussed on the proximity and movement of the mother’s beak as it descends from above with food. Naturally then, if a sibling’s head starts waving in front of your nose you will assume it is more food and peck at it. and as it will inevitably try to get away, you will re-double your efforts to grab it. It is interesting to note that when the ‘victim’ lies down in the bottom of the nest the stimulus and thus the ‘attack’ ceases. Also interesting is that it is not always the larger chicks that initiate the behaviour. Little One has been seen bouncing up and down when hungry,  trying to pile in with an upper-cut to the lower jaw of its elders – and sometimes succeeding! Sadly for him, the inevitable result is that though the fly-weight may pop in a few hits the heavy-weight, once it works out the direction of attack, will bat at the lighter contender until it understands that its place is at the bottom of the nest! (Until the nest round anyway.)