An exciting few days with sightings of ‘extra’ ospreys on the flowery shores Bassenthwaite and Derwentwater. 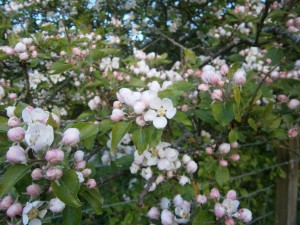 Sunday afternoon showed watchers at the Viewpoints and at Whinlatter some spectacular behaviours with the addition of a third bird flying in the area.

It started with Unring touching down onto the nest holding a fine looking perch and then despite having hungry chicks waiting, flying straight off with it again. Only a few minutes later KL started to mantle over the chicks shrieking her displeasure to the skies. Unring re appeared and sat himself on a side branch with the fish and then suddenly, perched on the top of the tree, was a stranger osprey also clutching a fish.

Unring was caught in a dilemma – there was KL screeching at him to chase away this intruder –  but to do this he would have to drop his hard won meal. We have seen him in this place before and as usual he seems to be a great believer in discretion being the greater part of valour – he stuck with the fish.

Meanwhile ‘stranger-danger’ was eying up the nest and the female, who by this time was in paroxisms of emotion and throwing herself over her offspring who flattened themselves in the bottom of the nest. It looked like a stand-off until the stranger upped the stakes. Dropping like a stone from the top branch he landed on the very edge of the nest. As KL lunged towards him he thrust his fish at her into the base of the nest and then with an insouciant swirl of the wing flew off low and fast towards Keswick. Whew – hot stuff! Unring seeing the retreat in his rival took off smartly and followed him at a sensible distance.

KL, panting in the bottom of the nest, became aware that she was sharing the space not only with her 3 ruffled chicks but also with a particularly fine rainbow trout. Oh well! Kids have to be fed and you should never look a gift fish in the mouth. Within a few minutes the family was enjoying their unexpected bounty.