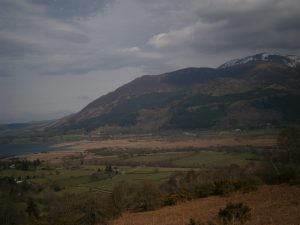 Not so Peaceful skies over Bassenthwaite

Here’s a concise timeline of what’s been happening with the Ospreys on Bassenthwaite.
It’s been a very perplexing start to the season, we’ve been trying to keep up with the osprey action but due to poor weather, signal disruptions with our cameras, and trying to identify so many unringed birds it’s been a difficult puzzle to piece together.
2cnd April: Unring male (KL’s partner for the last 5 years) is seen on the nest for the first time this year.
3rd April: Unring female is seen on nest. Our male does not offer her his fish and mantles against her.
4th April: Unring male is seen mating with a female and he brings new nesting material onto the nest.
5th April: A third unringed bird shows up on the nest. A fight breaks out between this bird and the unringed female. The new bird dives onto the other with such force the unringed female is expelled from the nest, they then tussle in the air and climb to a very high elevation. For the rest of the afternoon we only have 1 bird in view perched nearby the nest and a half eaten trout left alone on the nest.
6th April: 2 Osprey are seen together on a breeding perch all morning. 1 flies off towards the lake and the other flies to our nest where it stays for a large part of the day.
At this point we can see that this is a different  unringed bird from the one our male was mating with, it’s likely to be the bird that tussled mid-air with the unringed female. Later in the afternoon it is joined on the nest by our unringed male; who takes a bath in Bassenthwaite Lake and, returns to the nest where the unringed bird has remained.
We have not seen any mating today but neither have we seen any aggressive or territorial behaviour from our male. Still no sign of KL.
We will continue to observe the birds closely over the next few days and give updates of the drama at Bassenthwaite as it unfolds.