After the fiasco with the young lady in the second week of April. (A relationship that was as unromantic as it was brief) It had seemed that Unring had settled down into the carefree, if slightly lonely, life of a bachelor. His days have consisted of getting up in the morning to a nice fish breakfast, a turn about the Lake followed by some DIY repairs to an already perfect nest and then the rest of the day free for preening. No stress! 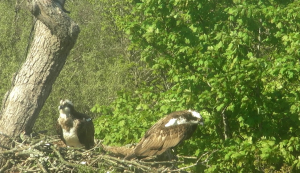 Then this afternoon everything changed again with the arrival of another female contender for the  bargain package-deal of home, food and husband. That’s her on the left, a young and very vocal virago upsetting Unring’s placid routine with demands for fish and frolic.

You would have thought he’d have jumped at the chance of passing on his genes to posterity, but with shoulders hunched, back turned to her, head down and wings splayed out it appeared if ever a bloke disliked the very idea of a blind date with an unknown bird, it’s him.

We will see if she’s still around in the morning!