Leading a bachelor life has its joys and its betrayals!

The young woman in Unring’s life is as unpredictable as one might expect, coupled with her winsome beauty. She has a brown smudgy chest and a long dark streak on the back of her head. Perhaps ‘Long streak’ would describe her appearance and nature.

Their relationship started on rocky ground on May 6th with Unring clearly stressed with the whole process of sitting close to a strange female. However, familiarity breeds confidence and through her sporadic visits he has come around to appreciating her charms and does not turn his back the minute she approaches.

However, this increasing warmth may only be because he realises that he has a rival – and it appears she is not subtle in pointing this out. Last week as Unring sat in the alders having his usual post-prandial nap Longstreak lured another young male onto the nearby platform to share an intimate lunch. Opening an eye after some time Unring spied this betrayal and rose into the air to defend his territory. There was an aerial battle in which Unring managed to put in a few punches and the trounced suitor flew off rapidly North. Meanwhile Longstreak sat on the side toying with her sushi and mentally giving marks for stamina and style.

The next day, Sunday, unsurprisingly, she spent hours basking on the nest of the victor and graciously eating the fish that he had provided. Ah -ha we thought! Have they bonded at last?

But no – come Monday she had disappeared again.

This behaviour would indicate that the female is young and not really ready to settle down – compare this with the flightiness of no 14 over the previous seasons. But who knows, maybe the groundwork is being in for next season? 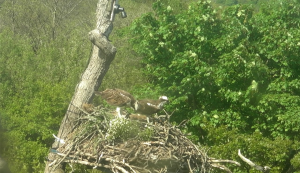 Longstreak on the left  – you can just about see this mark on the back of her head.