Now that it is damper and despite the earlier drought one tough plant is blooming now all along the wood edges. One of the most attractive plants of the forest its flowers stand around the stem like a wand of white stars. This is probably what has inspired its common name ‘Enchanter’s Nightshade’. Its Latin  designation Circaea lutetiana follows this theme from Circe, a witch of Greek mythology and Lutitia the Latin for Paris, sometimes known in the past as the Witch City.

In fact the plant is not poisonous being related to the Willowherbs and no connection to the Nightshades.

It needs no enchantment though to still view ospreys from Dodd. Unring continues to  guard his territory and visits his nest daily. At least 2 other ospreys are regularly seen at the South end of the lake – probably Longstreak the young unringed female and Blue 2H from the North end of the Lake. However, as mid August approaches it is getting time for the female birds to set off for Africa from all over the country so it is worth keeping a lookout on any piece of water for sightings of these birds migrating. 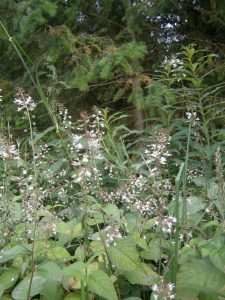