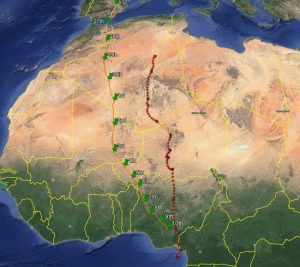 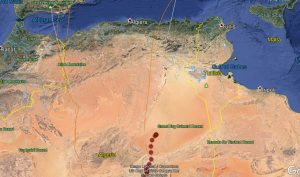 Update from Pete Davies:
Evening of 27th March – He is in Algeria heading for the Med in amongst the sand dunes of the Grand Erg Oriental
[ Wikipedia says: The Grand Erg Oriental is a large erg or “field of sand dunes” in the Sahara Desert. Situated for the most part in Saharan lowlands of northeast Algeria, the Grand Erg Oriental covers an area some 600 km wide by 200 km north to south. The erg’s northeastern edge spills over into neighbouring Tunisia.]
The first map shows his route from Bioko
The second is a close up of his position and shows how closely he is following his previous return routes when he crosses the Med via Sardinia and Corsica [the grey & orange lines]
Last Autumn – green pins – He flew down to Bioko crossing the Med further to the west via the Sierra Nevada and the Atlas mountains