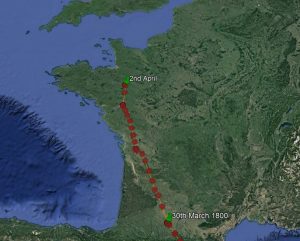 Here is the map from yesterday, 2nd April. It looks like No 14 is headed to Cherbourg for his channel crossing…..

The location where he has stopped for quite a few hours yesterday is an area with dozens of small etangs [lakes] , probably slightly less cold looking than Bassenthwaite does today. Here in Cumbria  it is all steel grey skies and water, and a thick covering of snow on the fell tops.

Also very good news from yesterday – a female osprey turned up on the nest. Unring was extremely excited by this, mantling and fluttering his wings, whilst she calmly consumed a fish. We are not sure if he had passed on the remains of a pike he had caught earlier, or if she had caught it herself. Whichever it was, the chemistry appeared to be right between them and romance blossomed. This is very different behaviour to that which he displayed last year, when KL did not turn up.

We have tried to identify her as one of the female birds that we saw around the nest last summer by comparing markings on video footage. However, it is still inconclusive. Crossed fingers that she stays!