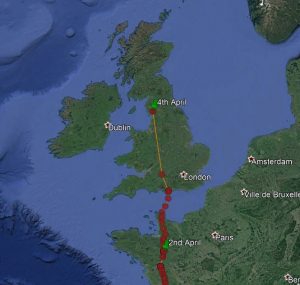 There’s something about Blighty that says ‘Home’. Just look at those yellow lines from the coast straight up North – he seems to have lapped his own red blips in the urge to reach the Lakes! What a contrast within a few days from the searing heat of the Sahara to the snow topped mountains of Cumbria. Let’s hope cold does not damp his ardour as at the age of six he should be nest building and looking up the numbers of any un-attached ladies he met last year.

Meanwhile his Dad, Unring, has certainly not let the hail, sleet and a brisk chill breeze deter him. On the 2nd he met up with a new female osprey and they were getting along fine on the 3rd, but on the 4th she was no-where to be seen. Yesterday however she was back and spent all morning with him. Seeing the two big birds flying up and down the length of the marsh was great viewing from the telescopes at Dodd. And on a smaller scale the nest box of the Lower Viewpoint was being investigated by a couple of cheery coal tits. Spring is definitely in the air.