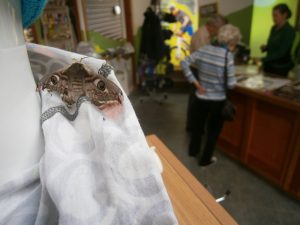 Viewing ospreys on the big screens inside Whinlatter Visitor Centre is a must, but what else can you see?

Admittedly, this was a one off but a sharp eyed visitor approached the desk this week to ask if we had noticed the beautiful moth snuggled into one of the displays.

We had not, and after looking at it with a number of ‘oohs’ and ‘aahs’ were not sure what it was. Perhaps a hawk moth?? Luckily our moth expert, (and ex-osprey volunteer) Peter MacQueen was on the end of the phone.

‘The eyes have it nailed’ he said. ‘It is an Emperor moth, Saturnia pavonia – but does it have any pink colour on the wings? No? Then it is a female.’ A male is slightly smaller and has more creamy yellow under-wings and pink lines with a bright pink flash on the edge of the upper wing. They fly in April to late May and like all short lived creatures have to make sure that they pass on their genes during that time. For Emperor moths this is more difficult than it sounds.

Watching Unring and his new mate we think that ospreys’ love lives are not simple. For the majority of the year they are not fertile and it is only when they arrive at the Lakes they have the chance, for about a month and a half, to mate successfully. However, where they lose on length of time they make up on frequency. Over the past two weeks our birds will have mated up to 200 times. Once would actually be sufficient to fertilise eggs, but no-one can know if the female has stored sperm from a previous encounter on the flight here (as have those females that visited Bassenthwaite on the way up to Scotland). Unring knows that to ensure that his genes have the most chance of being successful he must continue to mate until a full clutch of eggs have been laid.

For Emperor Moths just meeting is a conundrum. The female flies by night, coming out soon after dusk, letting loose her pheromones to attract males from up to 5 miles away. However, the male Emperor is a day time moth, and flies in the sunshine. Like permanent alternate shift workers who snatch a kiss as one goes in and one goes out, it would seem Emperor moths have to take slim chances. Only in the narrow door-jam of life between day and dusk can they achieve the brief encounters that ensure reproduction of their kind.