Yes, she is the one! Last Saturday evening the behaviour of Unring and his new mate changed. Gone were the care-free days of flying together around the valley, gone were the intimate tete-a-tetes whilst perched together on branches. Instead all activity was focussed on to the nest, with the female sitting down in the nest cup on the platform they have decided upon this year. From the telescopes though, we could not see if there really was an egg or not. We looked out for further signs that would indicate she was really brooding. Sure enough over the next few days she continued to sit low in the nest cup, displaying the  distinctive ‘shuffle’ where the egg would be turned over. A good clutch for an osprey is 3 eggs, laid at 2 day intervals. As a young bird this female may not have achieved this – but certainly she has at least one. Unring was doing his job too, fetching in fish, sitting within earshot and giving her the occasional spells. All looked to be going well and we decided that we could breath a sigh of relief.

However, Elyssium is hard to hold onto and there were a number of irritations for the couple to deal with. A move of house always means new neighbours – not all of them ready to welcome incomers with open wings. ….. To be continued. 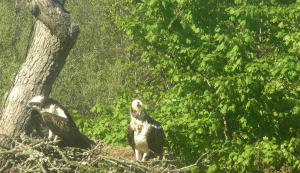 As the birds have moved nest site we don’t have a close up picture from this season. Here is a picture of Unring (left) and the young female he was with for the last part of the season 2018. We have been trying to see if the head markings of  lady above match the ones on the head of this year’s. We are still not sure!