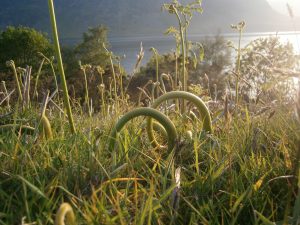 The higher slopes which were bleaching and cracking with the run of dry weather have had a soaking and the chance to green up again. Bracken fern is pushing through the hard top soil of many of the steeper slopes and high grazing areas. Nowadays it is often looked at as a pest and certainly it is a most successful plant, growing with slight variations in every continent except Antarctica. A bit like the osprey, which is not endangered globally, and again is found in every continent in its 4 subspecies.

odd one out, an island variety, P. haliaetus ridgwayi in the Caribbean.

Our pair are Pandion haliaetus haliaetus of course, Pandion after a mythical Athenian king and from the Greek, haliaetus, hals = sea and aetus = eagle.

Wherever there are shallow swimming fish there too should be ospreys, highly adapted to successfully fill this fishing niche. Bassenthwaite is a perfect example for both where shallow bays and inlets provide ample hunting grounds for the bird and steep dry slopes for the bracken plant to grow unchecked.

Bracken has a number of adaptations, one of which can be seen here where the stem takes the brunt of the first growth spurt instead of the more tender shoot, forming these croquet hoops. Deep rhizomes store food and water and tough stems prevent dehydration.

In the past it was much more highly regarded, in particular for its high potash content, both as a soil top dressing, and as a lye for soap and wool preparation. Burning Kilns were constructed over the Lake District. http://www.cumbria-industries.org.uk/a-z-of-industries/potash-kilns/

Maybe this is one way that small scale farms could make their own fertiliser rather than buying in?

It was also used as bedding and carpeting for both animals and humans. Containing a variety of natural anti-insecticides, it keeps down the bugs, is fully recyclable, great insulation and easily replaced.

Eco thought for the day might be to try bringing in a load of bracken each summer, instead of buying a synthetic carpet for the kitchen. Or at least question if the floor covering of your choice is recyclable/biodegradable!