All that is gold does not glitter

Not all who wander are lost  (Lords of the Ring)

Since wandering off for a while last week ‘Unring’ has been a model father, fishing and keeping guard from his habitual perches. 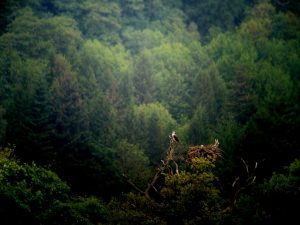 We have now had a chance to think back to the other males of that have nested on Bassenthwaite over the years. Did they ever go AWOL? – The first ‘No-ring’, here from  2001 – 2011, was  the most paternal of birds, and had a passionate interest in his chicks, standing on the edge of the nest to view them as they hatched and defying all his mate’s efforts to preclude him from feeding and sitting on them. Then there was YV, his son, in 2012, who appeared to have no interest in his offspring at all. However, both of these birds took time out mid season, YV on a rather regular basis which caused his mate to spend much of her time screaming at him but No-ring also took the odd day off. There is no doubt that although it is the female that has the bulk of the incubating and nurturing of the young chicks to do, the role of the guarding male also has its stresses. A good Dad will sit on perches where he can both see and hear the female on the nest and be constantly on high alert to her body language and calls, whether for giving her a break, food, or distress at an intruder.  He must be ready to react at any moment to go out hunting, or see off a buzzard, or most stressful of all, chase a rival osprey with intentions towards his wife and property. Is it then surprising that he occasionally feels the need to stride off to his man shed sometimes for some well earned time out?

Not all who wing their ways around the lake are of the feathered variety. The mixed habitats at Dodd cast up a huge variety of insects. Some are easy enough to identify and some we haven’t a clue. This one, taking a stroll along the fence line at the lower view point seemed a rather drab little creature, uniformly brown, although sporting some natty antennae. 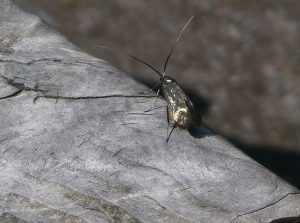 Then a shaft of sunlight split through the rather hazy cloud cover and an entomological transfiguration took place. As if touched by King Midas wings of umber turned to pure gold. It glittered like an Inca finger ring, blood of the sun running through the reflective lattice work of its body.  We watched it in wonder. For itself, happily oblivious to any curse of immobility, it walked on in royal state, until reaching the shadow, it abruptly reverted to commoner status again. 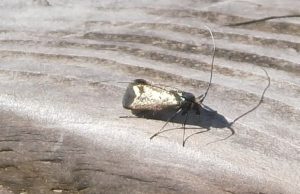