It’s quite crowded in the long shopping-mall of the Lake. When Unring goes hunting in the morning there is all the jostle and push of the Keswick Saturday Market, groups walking along chatting and bickering over the merits of balti or vindaloo, individuals eating chips from greasy paper cartons, families queuing slowly for the fast food stalls, Grans and Grampas perched on damp benches unwrapping picnic sandwiches. On the Lakes the behaviour is the same – only the species change from human to avian. 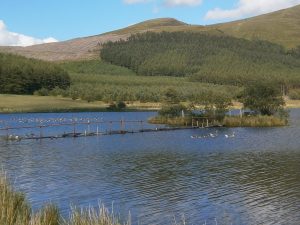 Here’s Unring swooping over to grab a quick bite fish in a splash of silver. Here’s a couple of herons staring unwinkingly over by the reed bed spearing a kebab of unwary frogs to feed to their grey mothball chicks. There’s a single egret, mincing along the margin, hoping no doubt to meet up with another lonely bird to share a minnow. Here’s a school of swallows, uniform in their blue-black plumage darting everywhere snacking on mayfly and midges. Here’s the swans with their 7 cygnets gracefully dipping into the Bento box at the bottom of the Lake, and all around the gaggling paddlings of tour-bus geese, geese and more geese. Over 300 Greylag, 150 Canada and 2 Embden crosses have been assembled floating on the water in big rafts at the South end of Bassenthwaite over the past week. 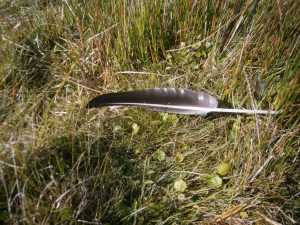 More potter about on the shore line, but are wary enough to waddle at speed to the water when the questing nose of a hungry fox pokes out between the tufts of canary grass. And all along the shingle beaches and muddy promontories are drifts of grey and brown feathers, discarded like winter gloves,scarves and bobble-hats at the warmth of the Soltice sun. The geese are in moult and like their chicks completely flightless for a few weeks. The whole family will grow their new feathers together and by the end of July will be ready to take to the air again. But in the meantime there are the bargain counters of water-weed and grass to mow through.