After the excitment of last week, we could be forgiven for wishing for a period of peace and calm.
And it was.
At first.
The day after Dad’s return saw him being very attentive to Mum: sitting with her in the nest at various points throughout the day and bringing in nesting material, the osprey equivalent of flowers and chocolate, I suppose.
Then last weekend, patient visitors spotted an osprey perching very obligingly down in the marsh…not one of the resident ospreys. A closer look at this mystery bird told us it was likely female, based on its size and the extensive “necklace” it was sporting. Mum and Dad tolerated the presence of this female, as long as she stayed perched just outside their territory. For her part, she was happy with her newfound perch and took the opportunity to have a good preen! Unfortunately, it was not possible for us to spy whether she was wearing a ring…ospreys have to have some secrets you know. 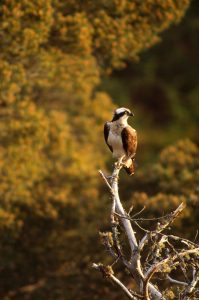 A perfect perch for an osprey (Image taken from archive)

The fun didn’t stop there. Well, it wouldn’t be Ospreywatch without a bit of excitement would it?!
Fast forward a few days and another unknown osprey joined Dad in circling over the lake. This bird looked paler and similar in size to Dad, leading us to tentatively ID it as male. Initially we thought it could be just visiting the lake for a spot of fishing and indeed the two males ignored each other at first. That all changed when the interloper flew by the nest and dared to have a peep in whilst both Mum and Dad stood guard over their young. What followed was an afternoon of catch me if you can with Dad following this unknown male as it flew around the valley. Although seeing off intruders is a serious business for Dad, it gave visitors to the viewpoint a wonderful spectacle to watch. The pair spiralled higher and higher until they were lost as two tiny specks against the cloud. Who is this male? Could it be the other “local lad” here at Bassenthwaite being a little too nosy about the business of his neighbours? Could it be a youngster migrating back for the first time or roaming the countryside looking for a place to call its own? Could it even be one of our own youngsters from 2017, returning home for the first time? So many questions! 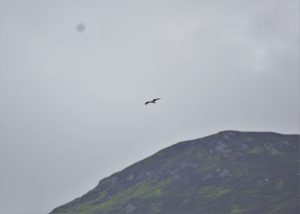 Soaring over the lake

As well as these unknown birds, we were incredibly lucky to identify another new bird to the area, a female wearing a ring on her left leg, telling us that she hails from bonny Scotland. We will be keeping our eyes peeled for her to see if we can glean any more information from her ring. Time will tell if she is here for the long haul, or only passing through, but one thing is for sure… there is plenty going on here at the moment to get excited about. 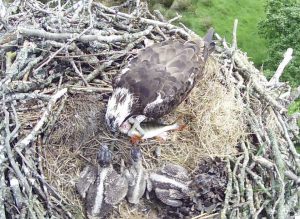 It has been three weeks since hatching, and it now appears that there is one chick in the nest, but what a chick it is! Young ospreys have a lot of growing to do in the 2 months they are in the nest, and this chick is no different. In a week, it has gone from being so small that we could only just see its head at dinner time, to stomping around on the nest after mum like a mini-me giving us amazing views of it, top to talons! As the only chick, it gets Mum and Dad’s undivided attention and doesn’t have to share any of its dinner with siblings. It is no wonder it is growing so well. It is already showing great spirit, and we always know when to look out for Dad flying in with a food parcel because the hungry youngster pops up and begins tapping away at mums feet. Usually Dad is not too far behind!
Things are really hotting up at this point in the season (and I don’t just mean the weather) so why not pop along to the viewpoint at Dodd Wood to say hi and see the action for yourself.