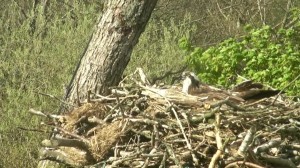 After a good start at incubation on one egg on Tuesday morning (May 7th) the young couple have gone on from strength to strength. Ospreys generally lay up to three (rarely four) eggs at two day intervals so we were waiting eagerly to see if there were any signs of a further addition to the nest on Thursday. As we cannot see into the nest cup we have to go on informed guesswork and the birds’ behaviour. On Thursday morning we watched closely as KL bent her head down into the nest and gently rolled the eggs around. She appeared to be moving more than one so we were pretty convinced there had been a happy event during the night. On Friday the pair were still mating successfully so we had great hopes there might be a third egg in the pipeline – ready to lay on Saturday. Ospreys usually do not continue to mate after the last egg is laid and we have not seen any more attempts today, Sunday. So, we can say that they definitely have one egg, they probably have two eggs and they might have three eggs!
Incubation takes anything from 35 to 39 days, so you can work out the date of a possible first hatch –