At last, thanks to Gwyn Lewis we now have a picture of the other male osprey who has been living at the more Northern end of the Lake for the last few years – 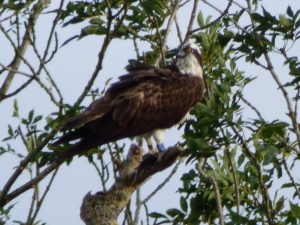 At the time I just thought maybe it was the male from Bassenthwaite. I lost sight of it as it dropped to the lake. I was driving along the lane back towards Overwater Hall Hotel, when I stopped to check around with the binoculars.

I spotted it fairly close by and was able to see it was ringed, so knew it wasn’t the ‘Bass male’ …I wasn’t sure about the female being ringed or not, that’s why I called by at your viewpoint so you might identify it.

I took the close ups from inside the car with window down so as not to cause it to fly off if I got out. I wasn’t a great distance away at all.

It was still there when I drove on.

(note the fish under its left talon).

I hadn’t been near Overwater for a couple of years now, so this was just the ‘one off’ sighting this Sunday.

Pleased that you could identify it and that I contributed something to the Bass osprey project!!

You certainly have. Thank you Gwyn!

Ospreys truly belong to all of us and to none of us: we are privileged that they live and breed in our community and can be spotted going about their daily lives by anyone, but they are also wild and free to make their own choices and hold their own secrets. Who knows how many thousands of miles Blue 2H has travelled to make this his summer home?.