It is hard to believe that only seven and a half weeks ago the Bassenthwaite chick emerged from an egg the size of a duck’s egg and now it is as big as its mum. Every time I see it sat up on the nest, I marvel at how quickly it has grown before my very eyes. Without exception, visitors are amazed to discover that the very adult looking bird they can see is actually the youngster.

We are now in the period approaching fledging. Assuming this chick was from the first or only egg to hatch, it will be 8 weeks old on Tuesday, and therefore fledging is imminent. Having said that, the youngster doesn’t seem to have got the memo, for her flight preparations seem to be a little behind schedule. We are seeing a little bit of wing flapping, but no real consistency to her efforts. Perhaps she is a late bloomer! 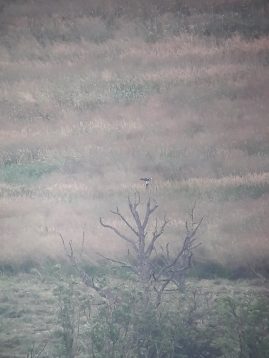 Instead the skies above Bassenthwaite and Dodd have been filled with other, equally enthralling winged residents. Let’s take a look at some of the raptors!

King of the marshland is a male marsh harrier who has been working really hard to steal the ospreys thunder this week. He has been putting in several appearances a day, demonstrating that distinctive low flight with his wings held in a ‘V’ position or perching on fence posts, flashing us a set of very yellow legs! 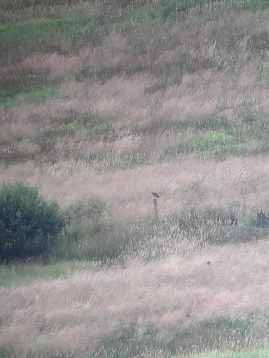 Not to be outdone, the peregrines have upped their game. Usually we hear them before we see them, their distinctive scream ringing out over Dodd like a phantom’s cry before that classic “anchor” shape scythes across the sky. Visitors have had amazing views of peregrines passing over the viewpoint with lunch clutched in their talons, pursued by some very unhappy crows. On another occasion, the peregrine put one of the local ospreys (2H) in its crosshairs, or rather, the fish he had just caught. After stooping on the poor, unsuspecting 2H, who very quickly and understandably scarpered, it helped itself to the fish and contemplated its success for a couple of hours sat on a post in front of the viewpoint. When it crossed paths with the osprey mum whilst she was bathing, just a couple of days later, it took her warning bop with good grace. 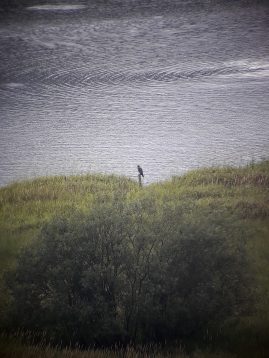 The list of raptors on view at Dodd goes on, with both sparrowhawk and goshawk haunting the woods here, kestrels hang almost motionless in the air below the viewpoint and buzzards soar with masterful ease wherever their broad wings take them. In any one day we can see as many as 8 species of birds of prey here.

So don’t hesitate, come along and see us at the viewpoint, open every day 10-5. How many will you see?