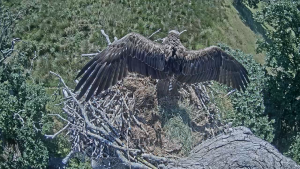 For the past two weeks Blue 400  has been stretching and then flapping her wings, straining toward her birthright, the miracle of flight.

Just three weeks ago, when she was ringed, she had so little muscle development that she could not even stand upright and used her puny wings to help prop herself up. Mum was still feeding her as her neck muscles were not strong enough to help her tear through fish skin and her talons could barely grip.

However, all this changed within a few days as the inexorable processes of development, fuelled by fish, forced growth to maturity. Her feathers lengthened and lost their downy edges, her legs stretched and stamped; talons gripped wriggling fish. The nest suddenly appeared small and there was a world out beyond it waiting to be discovered. Orange eyes stared out to map the branches and trees where her parents sat and instinct that had kept her firmly in the centre of the nest now reversed and she teetered on the outermost sticks.

The huge pectoral muscles to power flight expanded, filling in the spaces either side of her sternum and like a dancer poised for her first solo Blue 400 practised over and again the wing movements that would eventually steer her to the sky. They were slow at first, ungainly and lopsided, but the pace became fast and faster and faster until they were a maelstrom of brown and white. Sometimes she managed to keep her grip on the sticks but latterly she found her toes were hanging onto ghost branches, and in sudden panic dropped back to safety.

With visitors we waited on tenterhooks for that first wild terrifying jump into space. It  might happen at any second and so often it happens just when everyone is looking away. Turn around and she’s gone! But not today.

This afternoon she floated up and away and everyone watching saw her do it!

(Picture LDOP flight of her half sibling in 2017)